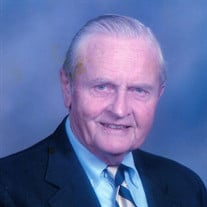 Richard A. Grimley, 89, passed away peacefully in his home on Sunday, November 12, in the warm embrace of his loving and devoted family. His beloved wife of 62 years, Joan D. Grimley, predeceased him on December 3, 2016. Richard was born in October of 1928 in Jersey City, NJ. As a young man, he set extraordinarily high standards for himself, and was subsequently awarded a merit scholarship to attend and later graduate from Newark Academy in Livingston, NJ in 1946. Always an excellent student, he continued his studies at Hamilton College in Clinton, NY, where he developed his life-long love of history and public speaking. He received his BA from Hamilton in 1950. Known by all those who knew him to be a true gentleman, his cheerful and sincere demeanor always left behind a warm impression and a new friend. In his professional life, he had a long and successful career in household textiles and retired as VP of Consumer Products and Sales with Cannon Mills, Inc., New York, NY. In his personal life, he served 12 years at Christ Church in Ridgewood, NJ in various capacities, including vestry member, lay reader and Warden. He later became a devoted member of St. Mark’s Episcopal Church in Palm Beach Gardens, FL where he served as a lay reader. When his children were young, he always found time to coach their sports teams, as well as cheer them on in all their academic achievements. He was a loyal, long-time member first of Bowling Green Golf Club in Oak Ridge, NJ, and later, The Golf Club of Jupiter in Jupiter, FL. It was not unusual for him to shoot below his age, but he was never boastful of the fact that often he had the lowest score at the end of any round. In addition, his hobbies also included Duplicate Bridge, reading and crossword puzzles. Richard, also known as “Dick, “Dad”, “Grandpa” and “Great Grandpa”, approached his life with enthusiasm and purpose, and an innate ability to allow an individual to feel like the most important person in the room. He is survived by Margaret G. Summers, (Phil) Monroe, NY; Anne Bennett-Ciaglia (Vince), Tequesta, FL; David E. Grimley, (Michele), Pennington, NJ; John A. Grimley, (Laurie), East Stroudsburg, PA, and Joyce G. McDonnell, (Mike), of Rosemont, PA. His eleven grandchildren – Tony, Meghan, Kaitlin, Anne, Ian, Brian, Declan, Michael, Chloe, Jordan and Leah, as well as his three great-grandchildren, Baylee, Avery and Dylan -- shared a loving bond with him. In addition, he is survived by his sister Marilyn Guidotti; nephew, Richard Guidotti, and niece, Elizabeth Bowes. In lieu of flowers, donations are welcome in Richard’s name to St. Mark’s Episcopal Church of Palm Beach Gardens, FL, General Fund Christ Episcopal Church in Ridgewood, NJ, Scholarship Fund. A service is planned for Sunday, November 19 at 2 pm at St. Mark’s Episcopal Church of Palm Beach Gardens, FL. Further details can be obtained from Taylor and Modeen Funeral Home, Jupiter, FL, (561) 744-2030. For online condolences, please visit www.taylorandmodeen.com

Richard A. Grimley, 89, passed away peacefully in his home on Sunday, November 12, in the warm embrace of his loving and devoted family. His beloved wife of 62 years, Joan D. Grimley, predeceased him on December 3, 2016. Richard was born... View Obituary & Service Information

The family of Richard A. Grimley created this Life Tributes page to make it easy to share your memories.

Richard A. Grimley, 89, passed away peacefully in his home on...