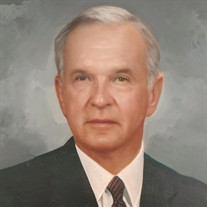 William Joseph "Bill" Taylor, 85, of Tequesta, FL, husband of Ann (FitzGibbon) Taylor died Friday, May 4, 2018 at the Jupiter Pavilion surrounded by family and love. Born in Hartford, CT on July 3, 1932, Bill was the son of the late Harold S. and Evelyn (McKenna) Taylor. His father died when he was 8 and his mother remarried a U.S. Coast Guard officer, H.R. “King” Cotton. After numerous relocations, Bill's family moved to Coral Gables, FL where he attended Saint Theresa High School and first met Ann. They married on September 6, 1952. Bill decided to pursue a career with Taylor & Modeen Funeral Home, a company co-founded by his grandfather in Hartford, CT. He received a degree from Eckels School of Mortuary Science in Philadelphia. After graduation, he served with the U.S. Coast Guard before moving to Hartford where he assumed a leadership role with the company. Bill expanded the funeral home in Connecticut, opening branches in Bloomfield and West Hartford. In 1968, he opened a location in Tequesta, FL, where he moved his family and resided for the rest of his life. Bill entered politics as a Tequesta Councilman and later held a seat in Florida House of Representatives. He established the first movie theater in Tequesta where most of the town children could be found on a Saturday morning. In 1981, Bill founded the T & M Ranch, a community for mentally disabled adults in Indiantown, FL; a truly progressive program at the time. Bill was a valued asset in numerous civic and philanthropic organizations. He served on Board of Directors of the Jupiter Medical Center, the Jupiter Medical Pavilion, Board Member of the Palm Beach County United Way, President of the Palm Beach and Florida Association of Retarded Citizens, President of the JTAA, President of the Tequesta Country Club and a longtime parishioner of St. Jude Catholic Church. When in West Hartford, Bill was a charter member of St. Timothy Parish and a member of Wampanoag Country Club, where he developed many lifelong friendships. Bill vastly enjoyed his time with children and grandchildren. He embraced and usually hosted holidays and celebrations too numerous to count, week long family reunions with Ann's extended family and eventually realized his life time dream of establishing a vacation home in North Carolina where his growing family enjoyed countless laughs, games and rounds of golf. Bill and Ann also spent many hours at his favorite haunt, The Tequesta Country club, with a wonderful circle of friends. Bill’s combined strength of character, sense of fairness, and depth of compassion are reflected in all that he did. He served his family and community with honor and dignity and his contributions will be reflected for many years to come. Bill is survived by Ann, his wife of 65 years; two sisters, Jan (Paul) Davisson and Kerry Wells; and nine children, Ann Upton, William J. (Julie Rosenthal) Taylor, Jr., Joan Taylor, Carol Taylor Block, J. Michael (Maria) Taylor, James Taylor, Andrew (Laura Krajewski) Taylor, Ellen (Steve) Eady, and Amy Taylor. He also leaves 18 grandchildren, Mark, Chris and Andrew Upton; Meghan (Nick) Taylor-Steshyn; Andrew, Sarah, Anna, Perry and Emily Block; Andrew and Melissa Taylor; PFC Ryan Taylor; Ann (Steve) McAdams and Katie, and Matthew Taylor; and John, Wells(Anna) and Allie Eady; and 2 great grandchildren, Wynn and Audrey Eady; a large extended family of cousins, nieces and nephews; and many dear friends. A Visitation will be held on Monday, May 7th from 5:00 to 8:00 p.m. at the Taylor & Modeen Funeral Home, 250 Center Street, Jupiter, FL. A Mass of Christian Burial will be celebrated at 10:00 a.m. on Tuesday, May 8th at St. Jude Catholic Church, 204 N US Highway One, Tequesta. Burial will follow at Riverside Memorial Park, Tequesta. In lieu of flowers, Donations may be made to Jupiter Medical Center Foundation, 1210 S. Old Dixie Highway, Jupiter, FL 33458.

William Joseph "Bill" Taylor, 85, of Tequesta, FL, husband of Ann (FitzGibbon) Taylor died Friday, May 4, 2018 at the Jupiter Pavilion surrounded by family and love. Born in Hartford, CT on July 3, 1932, Bill was the son of the late Harold... View Obituary & Service Information

The family of William Joseph "Bill" Taylor created this Life Tributes page to make it easy to share your memories.