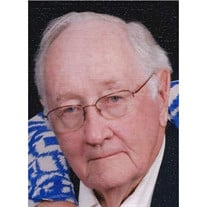 William H. “Bill” Perry U.S. Navy Atomic Veteran, coach, sailor, classic car and aviation enthusiast William H. “Bill” Perry 86, of Palm City, FL died peacefully in his sleep on April 9, 2022 at his home with his loving wife by his side. Born in Mt. Vernon, IL on August 18, 1935 he graduated from LaPorte High School in LaPorte, Indiana, having lettered in Track and winning the coveted National Industrial Arts Award from Ford Motor Company. He immediately joined the Navy and proudly served his country, including a stint as a Radarman in the nuclear atomic tests at Bikini Atoll in Western Pacific Ocean aboard the aircraft carrier USS Badoeng Strait. In 1959 he married Barbara Carnes and together had three children; Curtis (Dawn Boudreau), Matthew (Janet Gibbs) and 5 grandchildren. He was predeceased by son Gregg. He was employed by Pratt & Whitney Aircraft for 32 years. He moved to Jupiter in 1968 and coached kids sports for many years. Bill was a Tech Counselor and active participant in Experimental Aircraft Assoc. (EAA) Chapter 203 at North County Airport. The non-profit organization strives to inspire, develop and educate future generations of aviators from awarding scholarships for flight lessons to teaching hands-on skills to repair, maintain and build aircraft. Bill has built 5 experimental airplanes winning many trophies. Just weeks before his death he was still involved in the painstaking restoration of an aluminum motor glider. Besides sailing to Bahamas each summer to compete in the races in the Out Islands, he built a beautiful electric bay boat from scratch. His other passion was classic cars. He and his wife were regulars at local car shows and won praises from attendees with their 1966 Red Impala SS Convertible. During this time he raced a car with his sons and were well known with their “No Problem” race car. Services will be held April 30 at 11:00am at First United Methodist Church, 815 E. Indiantown Road, Jupiter 33477. In lieu of flowers, those who wish may make contributions to EAA Chapter 203, Honor Flights or Treasure Coast Hospice.

The family of William Howard Perry created this Life Tributes page to make it easy to share your memories.