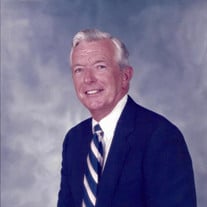 WILLIAM “BILLY” FARRELL AUGUST 3, 1935 – MAY 8, 2020 The Eagle Has Landed William H. Farrell, of Greenwich, Connecticut and Jupiter, Florida, sadly passed away on Friday, May 8, 2020 in Jupiter, Florida. Billy was born in Springfield, New Jersey, on August 3, 1935 to Catherine Hush Farrell and Johnny Farrell, and was the third of five children. He attended Holy Trinity High School in Westfield, New Jersey, and played serious basketball for four years becoming Captain of the team and President of the Athletic Association. After graduation Billy was accepted as a student at the General Motors Institute to be an engineer. Billy spent a year studying at General Motors before he decided to go to work for his father as an Apprentice at Baltustrol. Billy’s father, Johnny Farrell won the 1928 U.S. Open, defeating Bobby Jones in a 36-hole playoff. Johnny went on to win twenty-five tournaments during his illustrious career. Billy’s love and appreciation for the game of golf began when he got a lucky break and was asked to caddy for Ben Hogan on National Golf Day at Baltusrol in 1954, (which made his decision easy to leave General Motors). Hogan had also won the U.S. Open at Baltustrol. Hogan set a new course record of 64 that day, and with Billy observing all of Ben’s moves, he played the Championship course the following Monday and shot a 72. Billy had never broken 80 on the course before. His passion was found and the rest was a legacy in the works. During the late 1950’s, Billy began working on his game, helped by both his father and Jim Barnes, a former U.S. Open Champion and top touring professional in the 1920’s. Billy became known as the “Springfield Rifle”, because of his long drives. The hard work payed off when the New York Yankees would come to Baltustrol and Billy would often get to play with them. “I used to play with Mickey Mantle, Yogi Berra, Whitey Ford, Phil Rizzuto and others, and I would beat the heck out of them. They were great times…..They’d try to pay me with autographed baseballs, but I’d say, just show me the money. I should have taken the autographed balls. They’d be worth a lot today.” Billy’s goal was achieved in 1957 when he became the New Jersey Assistant Professional of the year, and won the New Jersey Open. He qualified and played in eight US Opens, seven National PGA Championships finishing in the top 11, and 70 Regular PGA Tour events, making 70 cuts. Billy also played in the Senior Championships. Billy’s tournament wins include: Met PGA Championship (1964), Met PGA Match Play (1964), Westchester PGA (1964 and 1971), Sports Illustrated Award of Merit (1964), Met Pro Lady (1966), Met Pro-Pro- (1972), Westchester Pro-Son (five times), Met PGA Senior Open (low pro, 1985), Westchester Senior Open (1985 and 1986), and Met Senior Pro-Pro (1988 and 1998). During his career as a PGA Touring Professional, he became close friends with Sam Snead (also a fishing buddy), Jack Nicklaus, Arnold Palmer, Ken Venturi, Tony Lema, and Chi-Chi Rodriguez. On the tour, he was considered one of the “long hitters” and during the 1967 U.S. Open at Baltusrol, he hit the par 5, 17th green in two. During the 1993 U.S. Open at Baltustrol, John Daly was said to be the first to achieve this feat, but records proved that Billy did it in 1967 without the benefits of metal woods. During the 1970’s, Billy was chairman for two years and co-chairman for two years of the Metropolitan Admissions Committee, which accepted and helped young golf apprentices become members of the PGA. He also served as vice president of the Met PGA. He was co-president of the St. Mary Home School Association and was chairman of Charity Tournaments for St. Mary High School, the Greenwich Boy’s Club and St. Peters Catholic Church in Jupiter, Florida. In 1963, Billy accepted the invitation to be the Head Golf Professional at the new Stanwich Club on North Street. The membership went from 150 members to 400, with a long waiting list. He established a long list of tournaments, successful outings for business and charitable organizations, junior programs, ladies 9 and 18-hole groups, a first-class driving range and state-of-the-art training center (with the help of his son Bobby), and hosted inter-club matches and the Met PGA and Open Championships, Westchester Open and PGA Championship (he was runner-up), and the 1981 LPGA Golden Lights Tour event. Billy retired in November of 2000 after serving the Club for 37 years. The Stanwich Club rates number one in the state of Connecticut. The defining moment in Billy’s life came on May 4,1957, when at twenty-one, he married his high school sweetheart, Alvera Chemidlin. They went on to have four boys, three girls, eighteen grandchildren. They recently celebrated their 63rd anniversary. Billy passed into eternal life from COVID 19 on May 8, 2020 surrounded by his loving family via Facetime. He is survived by his wife, Alvera Chemidlin, his children, William Jr. (Wendi), Tommy (Maureen), Bobby, Cathy Sullivan (Tom), Marybeth (Charlie), Susan Morrison (Matt), 18 grandchildren, Shelby, Cameron, Drew, Devon, Kelly, Emily, Ryan, Richard Amir, Evren, Ayla, Jessica, Sara, Thomas Jack, Dylan, Kourtney, Kendra, William and Conor. Also his sisters, Peggy McGuire and Cathy Rock. Billy was predeceased by his son, Richard in 2015. Due to the Pandemic, a celebration of life will be scheduled in the fall at St. Mary’s Church and the Stanwich Club. In lieu of flowers, donations can be made to The Nicklaus Children’s Heath Care Foundation, 11770 U.S. Highway One, North Palm Beach, Florida 33408, or at www.nchcf.org.

The family of William "Billy" Farrell created this Life Tributes page to make it easy to share your memories.