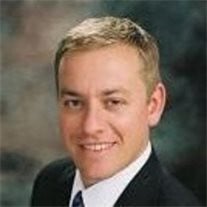 William Dallas Holland June 21, 1973 - August 25, 2011 Resident of Palm Beach Gardens, Florida, passed away August 25, 2011. Will was born in Pine Bluff, Arkansas and spent his early years in Hanover, New Hampshire and Charlotte, North Carolina, graduating high school from Charlotte Country Day School. He received his undergraduate degree from Furman University in Greenville, S.C., and then was employed by United Dominion Industries in Charlotte and London prior to going to graduate school. After earning his MBA from Indiana University in Bloomington, Indiana, Will worked in the financial industry in Baltimore, New York, and Chicago before moving to Florida to help manage a family owned business. Will was one of three children born to his loving parents, William R. and Donna Holland, residents of Jupiter, FL. Will is also survived by his sister, Kristen Palmer of Pinehurst, North Carolina and his brother John Holland and his wife Jennifer of Jupiter, FL. Will was very close and loved to spend time with his three nieces, Kelly and Kathryn Palmer of Pinehurst, NC and Madelyn Holland of Jupiter, FL and girlfriend, Jessica Lee Zahn. Will touched the lives of many with his quick wit and sense of humor and, although he hadn't lived in New England for many years, remained an avid Boston Red Sox fan, rarely missing a televised game. A Private Memorial service is planned for Friday, September 2 in Jupiter with arrangements made by Taylor & Modeen Funeral Home. The family requests that in lieu of flowers, all donations be sent to St. Jude Children's Research Hospital, 501 St Jude Place, Memphis, TN 38105, 800-822-6344, [email protected] Taylor & Modeen Funeral Home Family Owned & Operated (561) 744-2030, Jupiter, FL

The family of William Dallas Holland created this Life Tributes page to make it easy to share your memories.