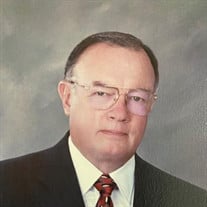 Today, October 21,2020 we mourn the loss of a true gentleman, a devoted husband, father, grandfather, an astute business professional and a dear, dear friend. William E. Campbell, born July 25, 1934 in Kenmore New York, graduated from Olean High School in 1952 and Bucknell University in 1956. He was President of the Delta Upsilon Fraternity and was named ROTC outstanding cadet before serving honorably in the U S Army where he taught leadership at Fort Belvoir, Va. In 1960 he was named President of Campbell Oil Company, a company established by his father. Campbell Oil under Bills leadership, a distributor of petroleum products in Western New York, New Jersey and Pennsylvania, held major distribution contracts with national brands including Sunoco, Mobil, Shell, and Citco. In addition to direct retail and branded dealers, convenience stores and truck stops the company provided fuel oil to commercial, farm and residential customers. He merged Campbell Oil Company with Griffith Oil Company (Sugar Creek Stores) of Rochester New York in 1986. The merged company employed over 1000, served 58,000 fuel oil customers, over 250 retail gas stations and convenience stores. In 1987 he accepted the presidency of Sugar Creek Corporation, the holding company for Sugar Creek Stores and Griffith Energy. Bill retired in 1992 and with his wife, Marvella relocated to Jupiter Florida soon taking on another business venture, a small company with a big name: Synthetic Turf International. Together they developed the company into an international presence with distributors throughout the world. Headquartered now in Dalton, Ga the company continues to be an industry leader in synthetic turf playgrounds, lawns, putting greens and major league sport fields. Bill Campbell loved people and nothing pleased him more than enjoying time with friends and family. He loved a challenging game of checkers with the grandchildren or burns with his children. Whether a game of golf with his buddies, a gin rummy tournament or a Las Vegas craps game, he was a competitor. Bill’s expertise as a boat captain aboard his Seven C’s was legendary. He delighted in building doll houses for each granddaughter and celebrated each grandchild’s graduation with a trip of their choosing. Bill served as Chairman of the Olean Chapter of the Red Cross, President of the Olean Chamber of Commerce, and the Industrial Development Agency of Cattaraugus County. He was a Director of Manufacturers Hanover Bank, Chairman of St Bonaventure University Development Committee and a Director of St Bonaventure University Board of Trustees. He is a past president and currently a lifetime , now honorary member, of Bartlett Country Club of Olean, NY. He served as Chairman of Empire State Petroleum Association (ESPA) and the National Sun Oil Jobber Council (NOJC). He was Director of the New York State Petroleum Council and the Oil Heat Institute of Rochester New York. In 1987 he was honored to serve as president of the national Petroleum Marketers Association of America (PMAA). After moving to Jupiter he was Chairman of Jupiter Medical Center. He is a current member and Past President of Turtle Creek Club and worships at the Sanctuary of Jupiter. Bill was pre-deceased by his parents, Kenneth E. and Doris Campbell and Nancy U. Campbell with whom he raised five children. Mr. Campbell is survived by his loving wife and partner of thirty-three years, Marvella Campbell. He is also survived by his five children; Catherine (Ralph) Wilson of Louisville, KY, Judith (Hugo) Sanchez of Leesburg, Va., Carolyn (Randall) Samuelson of Olean, NY., John (Caroline) Campbell of Charlotte, N.C. and Stephen (Christine) Campbell of Allegany, N.Y. Nine grandchildren; Lauren (Daniel) Maguire of Buffalo N.Y., Jacqueline (Daniel) Jones of Charlotte, N.C., Carl (Candice) Samuelson of Eagle Mountain, Utah, Michael Campbell of Charlotte, N.C., John (Laurel) Samuelson of Charleston, S.C., Cecilia Sanchez of Jacksonville, Fl, Stephen and Annika Wilson of Louisville, K.Y. and Sean Campbell of Allegany, N.Y. And six great-grandchildren: Riley, Morgan and Madeline Samuelson of Utah; Molly and James Maguire of N.Y. and Magnolia Samuelson of S.C. A Celebration of his Life will be held at Turtle Creek Club on Saturday November 7th at 3:30 in the afternoon following a private funeral service. In lieu of flowers donations are suggested in Memory of William E Campbell, The Presidents Club of Bartlett, 32 Euclid Avenue, Olean, New York 14760.

The family of William Earl Campbell created this Life Tributes page to make it easy to share your memories.