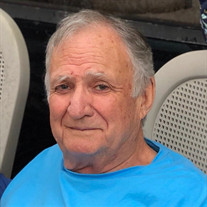 With great sadness the family of Dr. Walter E. Jolley announces his death on November 10, 2019. Born on November 16, 1942 to Marjorie and Walter N. Jolley, Walter passed six days before his 77th birthday. Upon high school graduation, Walter enlisted in the Navy where he served as a hospital corpsman. He served most of his enlistment in Philadelphia but was activated for offshore duty during the Cuban Missile Crisis. After leaving the Navy, he attended Purdue University earning a BS in Agriculture and his Doctor of Veterinary Medicine in 1971. Shortly after graduation, Dr. Jolley moved to Florida where he began practicing veterinary medicine in Lake Park. A few years later, he opened North County Animal Hospital, the first veterinary hospital in Jupiter, Florida. Over the years his knowledge and expertise brought health and healing to his patients as well as comfort to their human companions. After retiring, he continued to practice as a consulting veterinarian in Palm Beach and Martin counties for nine years. An avid outdoorsman, Walter loved diving in the Bahamas, hunting – especially pheasant hunting in the Dakotas – snow skiing and hiking. He shared his love of nature with his family, traveling and camping all over the United States. After retirement, he began woodcarving and excelled at carving ducks, songbirds, owls, and raptors. Walter leaves behind his loving wife of 53 years, Jo Ann Jolley, as well as two children, Mike Jolley (Jenny Lam-Jolley) and Jessica Jolley (Blake Hubbard). He also leaves his two grandchildren, Lillian and Wyatt Hubbard, who brought him joy every day. At Walter’s request there will be no public services. A celebration of life will be held at a later date. Those wishing to honor his memory are asked to make a donation to: The Nature Conservancy, 4245 N. Fairfax Drive, Suite 100, Arlington, VA 22203.

The family of Dr. Walter E. Jolley created this Life Tributes page to make it easy to share your memories.