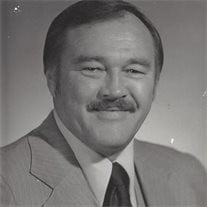 Walter T. Jasinski, 82, of Tequesta passed away peacefully at home on Monday, June 3, 2013. The son of Lillian and Charles Jasinski, Walt was born in New York City and raised in rural New Jersey. A graduate of Stetson University, Walt was a gifted athlete who excelled at team sports. As a young pitching prospect in the Brooklyn Dodgers farm system, Walt quickly established himself as a force, compiling individual season marks of 22-4 and 16-2 amid an overall 52-24 career record before injuries derailed is rapid ascent to the majors. Never one to dwell on disappointment, Walt soon embarked on a brief stint in the Merchant Marines before opening a new chapter in life as a decorated agent with the Federal Bureau of Investigation. His tales of life in the Cold War-era FBI were a source of wonder, intrigue, and humor to all who knew him. After leaving the "Agency", Walt soon found himself in the world of finance, a realm where he "didn't know a stock from a bond" initially by his own admission. That would soon change. Marked by a determination to succeed and a caring, ethical approach that lasted his entire career, Walt was trusted and admired by his peers and clients and eventually rose to the position of Senior Vice- President at Putnam Financial Services, where he spent many happy years. Even in retirement, Walt generously offered his advice and wisdom to all who asked. In his later years, Walt took delight living amid the ancient mountains of Highlands, NC and the glorious sunsets of South Florida and continued to enjoy his lifelong love for televised sports, travel, cooking, golf, fishing, good friends and good times. He embraced life and lived it to its fullest. All those he leaves behind are richer for having known and loved him. Walter is survived by his loving wife and best friend Judy, his son Steve Jasinski (Cheryl) of Pinehurst, NC; daughter Terri Stilla-Jasinski (Michele) of Assisi, Italy; stepson George Kelley of Philadelphia, PA; brother-in-law Gary Kelley (Tammy); sister-in-law Alice Smith; and many nieces and nephews who will dearly miss their "Uncle Waltee" but always smile when they think of him. Services are private and a Celebration of Walter's Life will be held at a later date. In lieu of flowers, the family asks that donations be made to either St. Jude Children's Research Hospital or to Hospice of Palm Beach County, whose grace and compassion are deeply appreciated.

Walter T. Jasinski, 82, of Tequesta passed away peacefully at home on Monday, June 3, 2013. The son of Lillian and Charles Jasinski, Walt was born in New York City and raised in rural New Jersey. A graduate of Stetson University, Walt was a... View Obituary & Service Information

The family of Walter T. Jasinski created this Life Tributes page to make it easy to share your memories.

Walter T. Jasinski, 82, of Tequesta passed away peacefully at...