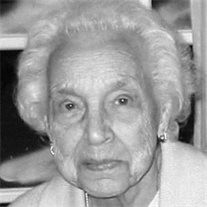 Virginia Lee Foley Davis Virginia Lee Foley Davis passed away peacefully on November 30, 2010 after living an exemplary life. She was 95. Born in Rushville Indiana, on September 23, 1915, Virginia moved to Miami, Florida when she was six years old. She graduated for Miami Edison High School and in 1933 she married Walter Ray Davis, an aviation forecaster for United States Weather Bureau. Virginia was the loving mother of three children and also had an early career as a medical technician in Miami. She later went on to become a successful production ceramic artist, was an active member in the Ceramic League of Miami, and taught sculpture to children at the Grove House Gallery in Coconut Grove. In addition to her professional and artistic pursuits, she and her husband were avid gardeners and members of the Coconut Grove Garden Club, the Miami Power Squadron, and enjoyed traveling to many countries. Virginia moved to Jupiter, Florida in 1984, where she pursued interests in computers, investment clubs, raising orchids and spending time with her grandchildren. Virginia lived the past four years at the Jupiter Pavilion where she was surrounded by many that loved her gentle character, unique sense of humor, and ability to laugh at life. Virginia is survived by her son, Dr. Walter Ray Davis Jr. and his wife Andrea of Atlanta, her daughter, Missy Davis Hamlin and her husband Ed of Atlanta, and her son Alan Foley Davis and his wife Lois-Anne of Jupiter, seven grandchildren Walter, Luci, Hope, Maegan, Paige, Robby and Christopher and nine great grandchildren Maggie, Luke, Nellie, Grogan, Asa, Sinclair, Hart, Walter, and Blaise. A memorial service will be held Sunday, December 12th at 3:00 pm at the Pavilion, 1230 South Old Dixie Highway, Jupiter, Florida. Donations in lieu of flowers may be made to Hospice of Palm Beach County. For directions and online condolences, please visit www.taylorandmodeen.com. Taylor & Modeen Funeral Home Family Owned & Operated (561) 744-2030, Jupiter, Fl

The family of Virginia Lee Davis created this Life Tributes page to make it easy to share your memories.