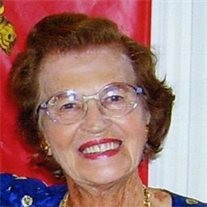 Victoria "Vicky" Marie Olowin Age 90, of Juno Beach, FL went to be with her Lord in heaven on Monday, May 28th, 2012. She is survived by her husband, Edwin Olowin, her sons Edwin Olowin, Jr., and Michael Olowin, daughter-in-law Lila Olowin, grandson Christopher Olowin, granddaughter Teresa Olowin, as well as her siblings, Pauline Dubowski, Julie Zapolski, Lawrence Ozimek and Peter Ozimek. Victoria was born on December 22, 1922 in Waterford, PA the daughter of Peter and Marie Ozimek. Along with her four siblings she spent her childhood living on her family farm. Her favorite stories to tell were about her adventures on the farm. She loved to talk about how hard her family worked, the tall hill they had to climb, the cold winters they endured to stories about their pet goose, Teddy. In her early twenties she left the family farm and moved to Erie, PA to live with her older sister Pauline. She started working as a waitress in the candy store/café of Polakas. Soon thereafter, she met the love of her life, Edwin Olowin. On July 5th, 1947 they were married at St. Anthony's Church in Cambridge Springs, PA. This church had special meaning to Victoria, as the altar was surrounded by beautiful figurines of angels. The following year, they were blessed with the arrival of their first born son Edwin Olowin, Jr. In 1952 they moved to West Palm Beach, FL where they made their new home. While being a loving mother and wife, Victoria also worked outside the home. Various establishments she worked at included Steen's Restaurant in Singer Island, and the Everglades Club in Palm Beach, as well as others. Victoria's passion life was to take care of people. She prided herself on this as well as her strong work ethic. In 1962, they were once again blessed with the birth of their second child, Michael John Olowin. While balancing her work schedule, she still found time to enjoy fun times with her son, such as going to the beach with here son where she taught him to swim and to appreciate the beauty of the Florida waterways. With her strong Catholic faith, she was a parishioner at St. Francis Catholic Church and later at St. Paul of the Cross Catholic Church. She was active in various ministries, always willing to lend a hand with the church flea market, or dinner dance. She was one of the founding member of the Ladies Auxiliary of the Knights of Columbus Council 4999, where again, one could always find her helping with the spaghetti dinners and Communion breakfasts. She and her husband, Edwin loved to dance and always commanded the dance floor, especially if the band was playing a polka. In her later years, she loved spending time with her grandchildren, taking them for walks and reading them stories. She loved watching them grow up, and was blessed to see her grandson graduate from high school two weeks ago. She started many traditions in her family, from the annual Christmas Eve Vigila dinner, to the ritual of cracking hardboiled eggs on Easter. She was famous in the family for her delicious Christmas cookies! She also was notorious for her green thumb. She could make any plant grow! It is her love for the Lord and her family that is the wonderful legacy she has left behind. A wake will be held at Taylor & Modeen Funeral Home on Friday June 1st from 4-7:00 PM. A Mass of Christian Burial will be celebrated at St. Paul of the Cross Catholic Church located at 10970 Jack Nicklaus Dr., North Palm Beach, FL on Saturday, June 2nd at 10 AM. Burial will be at Royal Palm Memorial Gardens in West Palm Beach. For online condolences and directions, please visit www.taylorandmodeen.com Taylor & Modeen Funeral Home Family Owned &Operated (561) 744-2030, Jupiter, FL

Victoria "Vicky" Marie Olowin Age 90, of Juno Beach, FL went to be with her Lord in heaven on Monday, May 28th, 2012. She is survived by her husband, Edwin Olowin, her sons Edwin Olowin, Jr., and Michael Olowin, daughter-in-law Lila Olowin,... View Obituary & Service Information

The family of Victoria Marie Olowin created this Life Tributes page to make it easy to share your memories.