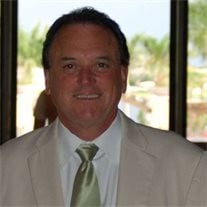 Tom Young, 66, passed away suddenly on Sunday, January 4, 2015 while attending church service at Harvest Bible Chapel Jupiter. Tom lived a full and blessed life. He was married for 43 years to his college sweetheart, Bev Bates Young. While attending Wittenberg University on a football scholarship, Tom was a four-year starter on teams that compiled four-year records of 32-5 overall. The Tigers won conference titles in 1966 and 1969. The 1969 team was a perfect 10-0, and also recorded a win in the first ever Amos Alonso Stagg Bowl. As team captain his senior year, Tom was named to the AP All-American team, and was later inducted in to the Wittenberg Hall of Fame in 2009. Although Tom was very proud of his steel mill roots in Clairton, Pennsylvania, he and Bev graduated from Wittenberg University, got married and headed for the warm climate of Florida. In Florida, Tom gained employment with Florida Power and Light and worked there for 41 years up until his death. Tom was the Director of Construction responsible for new and retro-fit power plant construction projects all over South Florida as part of the Engineering and Construction Division headquartered in Juno Beach, Florida. Tom enjoyed sports, fishing, and cooking, but his true passion was his family. He is survived by his wife, Bev, his son Zach (Sandy), his daughter Katie (Rob), his two grandchildren Adriana and Grady, his father Chal, sister Cindy (Dale), sister in-law Mary, niece Elizabeth, and nephew Alex. A Viewing will be held from 6:00 until 8:00 PM at Taylor & Modeen Funeral Home, 250 Center Street, Jupiter, FL on Thursday, January 8, 2015. The funeral service will be at Tequesta's First Baptist Church, 423 Tequesta Drive, Tequesta, FL on Friday, January 9, 2015 at 10 AM. In lieu of flowers, memorial contributions may be made in Tom's name to the Harvest Bible Chapel Jupiter Benevolence Fund which helps care for less fortunate families, 18477 Loxahatchee River Road, Jupiter, FL 33458.

The family of Tom Young created this Life Tributes page to make it easy to share your memories.