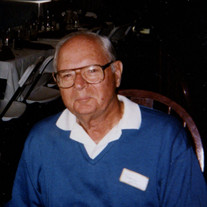 Thornton L. Johnson, Jr., of Tequesta, FL, went home to be with the Lord on January 20, 2018. He was born in Shelbyville, KY on September 12, 1923. He served in the Army in World War II. Starting in his college days at the University of Kentucky and throughout his life, Thornton Johnson bled Kentucky Blue. A relative was at the UK Engineering school a few years ago and found Thornton’s graduation picture there on a wall several decades after he graduated. He sure did love his alma mater. Thornton was an avid golfer and enjoyed all aspects of the game. He once achieved a hole in one on the General Course in PGA National. He married Margaret Richardson on March 24, 1951. She preceded him in death on October 16, 1993. He and Margaret marshalled many PGA National golf tournaments together. Thornton and Margaret vacationed in Scotland and Thornton had the opportunity to play the game he loved at its birthplace, St. Andrews. After his retirement from Southern Bell, he worked for Mark IV Clubs in Jupiter for several years refinishing golf clubs for many of the area’s golfers. Thornton played golf until he could play no more. Thornton also loved to fish. He and Shep spent countless hours together fishing, camping and swapping stories. When his lifelong friend, Paul Merrill of Madisonville, KY joined them they became “Dad, Dad and Dad”. Of all the things Thornton accomplished during his long life, he may have been most proud of the work he did refurbishing bibles for inmates in our area’s prisons. This was a unique ministry which he began on his own in his later years. While he didn’t seek recognition or anything in return, he did want to be sure that prisoners could read their bibles without them falling apart. He was moved beyond words when a group of inmates from Belle Glade’s prison made a huge thank you card for him on a simple sheet of poster board. Word caught on and eventually he was refurbishing his fellow parishioner’s bibles and ultimately anyone who asked. While he never asked to be compensated, any donation he accepted was used solely to purchase leather and materials to continue his good works. Thornton lived a Christian life not only by his words but more importantly by his example. He and Margaret travelled to South America and Grenada and distributed bibles to every home they could reach. Their desire was for every person have an opportunity to come to know Jesus Christ as their personal Lord and Savior. Thornton loved his three girls very much. From the time they were little and throughout their lives, he was their coach, advisor and counselor. He was blessed to be granted time to watch his family expand and his grandchildren grow up to become the young adults they are today. Thornton, with his dry wit and southern sense of humor will be dearly missed. Memories of him will be cherished by all those who knew him. Thornton fought the good fight, finished the race and his whole family rejoices that his eternity with our heavenly father has begun. He is survived by three daughters: Beth TerMarsch (Willy), Suzan Pennington (David) and Jennifer Johnson; Grandchildren: Bonnie TerMarsch, Jenny TerMarsch, Wendy TerMarsch, Kate Davis, Lee Rohrer (David), Cameron Davis and Hunter Thornton West; Shep West; GreatGrandchildren: Becky Baker, Jessica Pettersen and Otto Rohrer. There will be a public Visitation at Taylor & Modeen in Jupiter, FL 4:30 – 7:30 PM on January 31, 2018. Funeral Service will be held at 6:30 PM on February 1, 2018 at Beacon Baptist Church where he was a long-time member. For directions and online condolences visit www.taylorandmodeen.com

Thornton L. Johnson, Jr., of Tequesta, FL, went home to be with the Lord on January 20, 2018. He was born in Shelbyville, KY on September 12, 1923. He served in the Army in World War II. Starting in his college days at the University of Kentucky... View Obituary & Service Information

The family of Thornton Lee Johnson Jr. created this Life Tributes page to make it easy to share your memories.