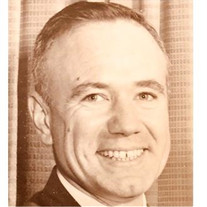 Thomas Bernard Doyle, July 31, 1925 – August 22, 2018 Thomas Bernard Doyle died peacefully on the morning of August 22, 2018, after a long illness. Tom is survived by his wife of 68 years, Joan Kelly Doyle, and his daughters Jody Doyle Block and her husband Louis Thomas Block IV, Mary Doyle Kenkel and Margaret McCaffrey Doyle. He was preceded in death by his eldest daughter, Kathleen Doyle Pavelish. He had eight grandchildren and eight great grandchildren. Tom was born in Brooklyn, New York and was raised in the Murray Hill section of New York City near the Morgan Library. He loved to regale his children with stories of shoveling snow for JP Morgan, Jr., for which he received a silver dollar. He graduated Xavier High School in New York City and joined the Army to fight in World War II. He fought gallantly in the South Pacific where he had the distinct honor of freeing one of his High School priests from a Japanese prisoner of war camp. He went on to run the Manilla Hotel, which still stands today, for the officers serving in the Philippines. He completed his studies at Norwich University, Vermont, where he majored in Chemistry. He went on to work for Union Carbide in New York and New Jersey and married his bride in Ridgefield, Connecticut. He was transferred to Cincinnati, Ohio where he lived until his move to Juno Beach, Florida. He loved his Irish heritage, as the son of Rose Anne McCaffrey who emigrated from Ireland as a teenager. Tom also treasured his involvement in the community and in 2016 he was thrilled to receive the Juno Beach Citizen of the Year award. Cited as one of Juno Beach’s cherished citizens, he served as President of the Juno Beach Civic Association for two years, director for three years and treasurer for 16 years for a total of 19 years of dedicated service. He was a regular at the annual 4th of July breakfast which included this past July. He also enjoyed serving as timekeeper for various Candidate night debates. In addition, he was always available for special town projects. He relished gardening – a trait passed to his daughters, helping his wife Joan with the Friends of the Arts and was one of the most ardent supporters of Joan’s art work. A celebration of Tom’s life will be held, Monday, August 27th at 11:00 am, at St. Patrick’s Catholic Church, 13591 Prosperity Farms Rd, Palm Beach Gardens, FL. In lieu of flowers, the family encourages friends to donate to find a cure to the Idiopathic Pulmonary Fibrosis Foundation in Tom’s name. https://pulmonaryfibrosis.donorpages.com/Tribute/ThomasDoyle

The family of Thomas Bernard Doyle created this Life Tributes page to make it easy to share your memories.