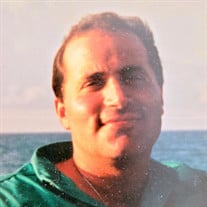 Steven Carl Sacco, age 63, passed away suddenly on February 13, 2021. Steve was born in Plainfield, NJ on July 22, 1957 to Eugene and Betty Sacco. He attended Palm Beach Gardens High School and went on to Appalachian State University in North Carolina on a baseball scholarship. He obtained Bachelor's degrees in both Marketing and History before moving on to his career where he spent time as both a stock broker and a teacher. Steven had a lifelong love of baseball, was a Little League and Middle School coach and had a keen interest in American and World history He attended St. Jude Catholic Church in Tequesta and will be deeply missed by those who loved him. He is survived by his parents, Eugene and Betty Sacco of Jupiter Inlet Colony; his dear sister, Stacy Sacco; his Aunt Rita Chorniewy and her children Tom Chorniewy, Jim Chorniewy, his son Justin and Gail Rybak (Alex) and her daughter Lindsay Ann Alfrey (Cody); his Aunt Emily Taylor and her son Scott; his cousins Gene (Lena) and Bill (Eileen) Sacco and his son Michael, Bobby Fowler (Vicki), Phil and Kirk Skinner and Ali Murphy (Seamus) and Austin McAnlis as well as by his longtime protege, Josh Cuthbert (Kayla). Steve is predeceased by his dearly beloved sister, Sally Amelia, who had been attending the University of South Florida School of Medicine when she died tragically in a scuba diving accident in 1982. He is also predeceased by his close and loving cousin, Caryn McAnlis (Scott), who very sadly died last year of cancer. A Memorial Funeral Mass will be held at St. Jude Catholic Church in Jupiter, FL at 10:30 in the morning on Saturday, February 20, 2021. All are welcome to attend in person or by live stream at: www.stjudecatholicchurch.net. In Lieu of flowers, donations may be made in Steven’s memory to Catholic Charities of the Palm Beaches, 9995 N. Military Trail, West Palm Beach, FL 33410.

The family of Steven Carl Sacco created this Life Tributes page to make it easy to share your memories.