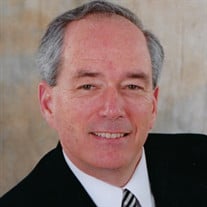 Steve Douglas, born July 10, 1951 in West Palm Beach, a fourth generation Douglas in West Palm Beach, peacefully passed away at home in Jupiter on October 18, 2019 following a short courageous battle with cancer. Steve was surrounded by his dedicated and loving wife and soulmate Patti and other family members. Steve, a graduate of Forest Hill High School, West Palm Beach, Class of 69. He attended the University of Florida receiving his BA, in English in 1973; BS, in Business Administration in 1975. He was a Brother of the Alpha Tau Omega Chapter at the University of Florida. As Alumnus they were lifelong avid Gator Fans and contributors to the University of Florida. Steve began a 13-year successful sales career with Mac Papers, in Jacksonville and the Daytona area. He achieved distinguished sales recognition and was a multiple year member of Mac Papers Professional Sales Club. During his career with Mac Papers, Steve met Patti the love of his life on a blind date, they were married eight months later. They just celebrated their 38th Anniversary. After Mac Papers, Steve began a 30-year career with State Farm with his first agency in Ormond Beach, FL. In 1992, Steve migrated to Milton, FL to take over a State Farm agency. For the next 15 years he built a very successful agency helping so many diverse people and families with their insurance needs and financial security. In 2009, they migrated again to take over a State Farm Agency in Jupiter allowing them to "come back home" to the East Coast, were they resided. It is here in this agency that Steve put together a team of colleagues that to this day is truly "family". This family along with many will truly miss Steve's inspiring, kind, and professional presence. Throughout his years with State Farm he earned many notable awards two of them being in the Chairmen and President Clubs. While continuing his successful State Farm career in Jupiter, Steve's lifelong passion for writing became firmly rooted. In June of 2011, he wrote his first song. Steve was a featured contributor to the book, "Blueprint for Success: Fourteen Powerhouse Professionals." In September 2015, after several years of dedicated work, Steve's book "Purpose PIE: Really Living in the Sweet Spot of Life" was published and is an ongoing inspiration to many. Steve gave many hours of his life as an Inspirational speaker. At the time of Steve's passing, his completed work, "Penelope: A Tail's Tale of Stubborn Gladness" was in the hands of his New York editor. Steve's wife Patti and his editor promise "Penelope will fly" to get Steve's message of stubborn gladness out to children." Steve and Patti were Deacons at JupiterFIRST Church: Their faith became the center of their marriage. His faith, gentle soul, integrity and ability to connect with so many made him a wonderful mentor impacting a lasting change in their lives. Steve's life purpose was: "To serve and to inspire in making a positive and profound difference in the lives of others." For years he mentored through the Big Brother program. Steve is survived by his loving wife Patti; wonderful mother Susan McCaa Gates (Dick); amazing brother Joey (Heather) Douglas; many dear, nieces, nephews, cousins, brothers-in-law, sisters-in-law and many, many friends. Steve was preceded in death by his father Howard C. Douglas. Patti and Steve's family would like to express their gratitude to the doctors, nurses, and all the staff of Jupiter Medical Center for their skillful, compassionate, professional, and amazing care. In lieu of flowers, Wounded Warriors 855-448-3997 or ASPCA - (800) 628-0028.

The family of Steve Douglas created this Life Tributes page to make it easy to share your memories.