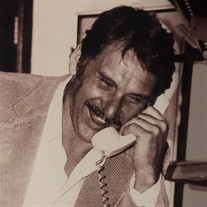 Sidney Guy Lovelace died on December 14, 2018. He was predeceased by his wife of 59 years, Patricia, his parents, Leslie Gordon Lovelace and Francis Bowen Lovelace and his brother and sister, Gordon Eugene Lovelace and Anita Loraine Lovelace. Guy, as he was known by his friends was an Emeritus member of the American Institute of Architects. He attended Cornell University of Mechanical Engineering and Syracuse University College of Liberal Arts. He graduated from Syracuse University School of Fine Arts-Architecture Summa Cum Laude. He was a member of Zeta Psi social Fraternity and Phi Omega Phi scholastic honorary. His favorite author Mark Twain wrote' “You will be more disappointed by the things you didn't do than the ones that you did do. So throw off the bowlines, Sail away from the safe harbor. Catch the trade winds in your sails. Explore, Dream, Discover.” Guy spent his life Exploring, Dreaming and Discovering. He founded and was President of one of the countries first furniture leasing companies. He owned an interior design firm, an architectural firm and a construction firm that pioneered the installation of prefabricated restaurant interiors from Maine to California, including Le Grande Scene at the Kennedy Center in Washington D.C. He owned or was partner in several restaurants. He was managing partner of furniture manufacturing facilities in Mexico, Haiti and Costa Rica. He was Vice President for Planning and Development of Divi Hotels NV and was owner operator, with his wife, of their own boutique hotel, The Windmills Plantation, in the Turks and Caicos Islands. He served as President of the Camillus Republican Club and the Mallard Ridge HOA. He was chairman of the Upstate New York Goldwater Election Committee and a Republican committee man. He was a member of the Board of Directors of the Syracuse Junior Chamber of Commerce. His architectural firm designed hotels, casinos and time share units on the islands of Aruba, Bonaire, St. Martin, St. Croix and Barbados. He was presented to Queen Elizabeth II for his work on the restoration of historic Illaro Court, the Prime Minister's residence on Barbados. After retiring he spent his time in Tequesta, Florida or Easton, Maryland, swimming, golfing, writing and enjoying his children, grand children and great grandchildren. He is the published author of fifteen books and a contributor to his wife's cookbook, Caribbean Cooking Made Simple. He is survived by three children, Karyn Lovelace Dustin, Diane Lovelace Everngam and Bradley Guy Lovelace as well as eight grandchildren and four great grandchildren.

The family of Sidney Guy Lovelace created this Life Tributes page to make it easy to share your memories.