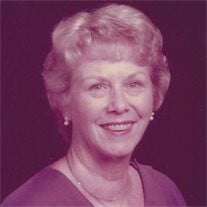 Sara "Scootie" Shields Lang, age 86, of Jupiter, Florida and formerly Miami, Florida, passed away on Sunday, July 13, 2014. Daughter of the late Benjamin Ernest Shields and Irma Heath Shields, Scootie was born in Atlanta, Georgia, and grew up in Decatur, Georgia. Scootie graduated from the University of Georgia, where she was a member of Kappa Delta sorority. While in college, she earned her pilot's license, flying a Piper Cub and a Stearman bi-plane. After meeting the love of her life, William "Bill" D. Lang Sr., on a blind date, the two were married on September 15, 1951, and settled in Miami, Florida. Scootie and Bill raised their family in Miami, before moving to Jupiter, Florida in 1989. Family meant everything to Scootie; she was a loving wife and mother who always put her family first. In addition to her husband, Bill, Scootie is survived by her children, Carol D. Lang of Miami, Florida, William "Bill" D. Lang, Jr. (Lisa) of Pembroke Pines, Florida, and Robert "Bob" B. Lang (Monique) of Palmetto Bay, Florida, as well as three grandchildren, Nicholas, Alex and Maya. She also leaves behind many good friends. There will be a visitation held for family and friends at Taylor & Modeen Funeral Home in Jupiter, Florida on Thursday, July 17th, from 6:00 pm - 8:00 pm, A funeral mass will take place on Friday, July 18th, at 10:30 am at St. Jude Catholic Church in Tequesta, Florida. Interment will take place in Savannah, GA

The family of Sara Shields Lang created this Life Tributes page to make it easy to share your memories.