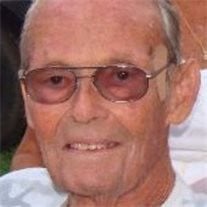 S. Bill Bartlett 80 of Jupiter, FL, formerly of Linwood, NJ, left a family gathering here on earth to join his family in heaven on January 20, 2011. He is survived by his wife of 60 years, Joyce, and his four children; Gail Pankey & husband Walt of Bedford, VA, John Bartlett and wife Bailey of Jupiter, FL, Sue Bushem and husband Brian of Orlando, FL and Carol Channer and husband Wayne of St. Cloud, FL. He was a very proud Popop, beloved by his nine grandchildren and fourteen great grandchildren. He was predeceased by his parents, John Lake and Ida Bill Bartlett, and his three siblings, John, Madeline and Robert. Born in new Jersey, Bill worked as a registered union electrician and for Atlantic City Electric Company. A prominent citizen, he served as First Assistant Chief for the Linwood Volunteer Fire Department and Rescue Squad and on the Linwood Board of Education. He also dedicated years of service to the Boy Scouts. After moving to Florida in 1977, he continued his commitment to public service with the South Martin County Volunteer Fire Department. Quite the entrepreneur and true jack-of-all-trades, he owned and operated Sailing By Jupiter! and Bill's Sharpening Service. In 1994, he and his son co-founded Barricade International. Bill will be fondly remembered as a loving family man who enjoyed dancing, especially the Jitterbug at family weddings. he took pleasure in fishing, sailing, boating, snorkeling, travelling, woodworking, and socializing with his many friends, and "two Bartlett fingers" of Scotch on ice. Bill enjoyed his final days surrounded by family members and kept his keen sense of humor and sharp wit until the very end. In lieu of flowers, the family suggests contributions be made to Busch Wildlife Sanctuary, 2500 Jupiter Park Drive, Jupiter, FL 33458 or the charity of your choice. Arrangements are under the direction of the Taylor & Modeen Funeral Home, Jupiter, FL where online condolences may be made at www.taylorandmodeen.com.

S. Bill Bartlett 80 of Jupiter, FL, formerly of Linwood, NJ, left a family gathering here on earth to join his family in heaven on January 20, 2011. He is survived by his wife of 60 years, Joyce, and his four children; Gail Pankey & husband... View Obituary & Service Information

The family of S. Bill Bartlett created this Life Tributes page to make it easy to share your memories.