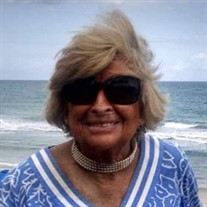 Rosemary Denmark Murphy September 2, 1932 – March 4, 2021 Rosemary Denmark Murphy completed her earthly journey on March 4, 2021. She leaves behind her love and legacy to her seven children: Paula, David (Mary Barrett), John, Meredith (Andy Gremel), Richard (Cheryl Pollak), Rosemary (Jan Matejka) and Jennifer (Joe Kubic); 18 grandchildren [Allison (Megan) VanKuiken, Chris VanKuiken; Caroline Murphy, Elizabeth (Chris Eakins), David John Murphy; Kate, Ben, Kelsey (Mick VanVossen), and Jackson Murphy; Emily (Allan Vander Laan), Ashley (Scott Racette) Gremel; Matthew, Ben, Andrew and Owen Matejka; and Joey, Jackson and Julia Kubic; as well as her six great grandchildren; siblings George (Ann) Denmark, Jane Maher, and Jay (Cheryl) Denmark; brother-in-law Bob Murphy, 19 nieces and nephews, and a large family of friends. She was preceded in death by the love of her life, Richard D. Murphy; her parents, John and Genevieve Denmark; in-laws Roy and Josephine Murphy; grandsons Charlie VanKuiken and Alex Gremel; brother-in-laws Kevin Maher and Jim Murphy; sister-in-law Jean Murphy; nephews Christopher and Michael Denmark and Terry and Paul Maher; as well as dear friends Sheila McDonald Smith and Elizabeth (Betty) Jennings. Rosemary was born in Boston on September 2, 1932 to Jack and Genevieve Denmark, the oldest of four children. From her earliest days growing up outside of Boston, Rosemary was resilient, surviving Scarlett Fever as a child, rebuffing discrimination against Irish Catholics, and breaking barriers for women. She was a voracious reader and impactful leader who valued the importance of faith, education, justice, respectful debate, and advocating for those whose voices were not being heard. Rosemary was the first in her family to graduate from college, and mused she missed her calling as a lawyer and litigator. She channeled her bright mind to mentor many, and relentlessly pursued her conviction to serve others. She was not a fan of sideline critics. While teaching English at Hingham (MA) High School and waitressing at the Coonamessett Inn on Cape Cod, she met and fell in love with the dashing, piano playing US Air Force Lieutenant Richard Murphy from Grand Rapids, MI. They married October 8, 1955 and moved to East Lansing, Michigan where she continued teaching until starting their family. Rosemary then embraced service outside the classroom, editing textbooks and cultivating her children’s writing skills – while engaging with her community as a change champion. Rosemary served as one of the first female chairs of the Heart of West Michigan United Way, a State Commissioner for the Area Agency on Aging, a board director or trustee for Butterworth Hospital/Spectrum Health, Aquinas College, DA Blodgett, Saint John’s Home, Gerontology Network, and the Junior League; as well as numerous leadership roles to reform the juvenile criminal justice system, secure services for the most vulnerable, celebrate the nation’s bicentennial, and protect the rights of older adults. Rosemary was honored with an inaugural group of leaders to receive the annual YWCA Tribute Award (1977) and the Aquinas College Distinguished Service Award (1989). Regardless of what shoes she was wearing, she taught, mentored and befriended hundreds, collaborated for positive change, and sustained lasting relationships for decades. Rosemary loved the beaches of Cape Cod and southern Florida, often claiming a bob in the ocean could cure just about anything, including her poison ivy. She was happiest spending time with her family, whether shuttling kids to sporting events in her Vista Cruiser, hitting the slopes in northern Michigan, rolling in the family motorhome (“bus”) to the Cape for lobster boils or to Florida with a close group of friends and their families (known as the Wagon Train), or sailing Lake Michigan on the Amanda Lee (with a side trip to hunt for fashion bargains up and down the Magnificent Mile in downtown Chicago). Rosemary absolutely loved traversing the country to see her children, grandchildren and wonderful family of friends. Rosemary lived life right to the end, taking university level classes in southern Florida, volunteering every Tuesday at a local shelter, raising others’ spirits and aspirations in her inspiring way, and teaching grace, patience and faith as her world imposed insurmountable restrictions. A private funeral mass will be celebrated with the family by Rosemary’s lifelong friend, Father Bill Russell, SJ. True to her Irish lineage, the family also is holding a virtual wake for her large extended family and close friends. In lieu of flowers and in recognition of Rosemary’s giving spirit, please consider a gift to your favorite charity, the Richard D. Murphy Memorial Scholarship at Aquinas College, or an act of kindness. Sláinte.

The family of Rosemary Denmark Murphy created this Life Tributes page to make it easy to share your memories.