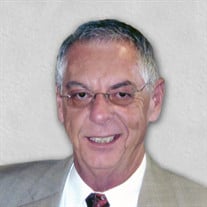 Roland Erik Borglund, age 71, died on December 24, 2018 at his home in Jupiter, FL. He was born on December 27, 1946 in Hartford, Connecticut to John Walter Borglund and Marie Lucille (Lambert) Borglund. A Navy ‘junior’ he attended numerous elementary schools from Maine to Florida, including a two room schoolhouse on Long Island, Maine. He graduated from Chicora High School in Charleston, South Carolina and attended the University of South Carolina. He enlisted in the United States Navy in 1966 and saw active duty on the USS Hunley. On March 10, 1973 he married Susan Therese Zegler in West Hartford, Connecticut. A gifted, award winning architect, he designed numerous private residences and public buildings in the Jupiter area and in other communities across the country. He loved to travel, but this kind man’s greatest joy was spending time with family and friends. Roland is survived by his wife, Sue; sons John Ryan and Erik; a daughter Taylor Marie; a sister JoAnn (Michael) Frick; an uncle, Sven (Maddie) Borglund; aunts Teresa Bonneau, Beatrice Czapla and Marie Wolfersdorf; and numerous cousins, nieces and nephews. A Visitation to remember his life will be held on Friday, January 4, 2019 from 4-7 pm at the Taylor Modeen Funeral Home in Jupiter, Fl. A funeral mass will be said on Saturday, January 5, 2019 at 10 AM at St. Peter’s Catholic Church in Jupiter, FL. Burial will occur at a later date at the South Florida National Cemetery in Lake Worth, Florida. In lieu of flowers, donations can be made to the Borglund Scholarship Fund established for Taylor. https://www.gofundme.com/borglund-scholarship-fund.

The family of Roland Erik Borglund created this Life Tributes page to make it easy to share your memories.