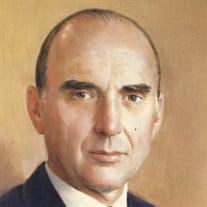 Roger E. Birk passed away peacefully on November 5th, 2018 at the age of 88 after an eight year battle with melanoma. Roger is survived by his wife of 63 years, Mary Lou, and three daughters: Dr. Kathleen Birk, Mary Colas and her husband Tim, and Barbara Birk. He is also survived by nine grandchildren: Emily, Nathan, Ryan, Kelly, Robert, Katy, Brandon, Kristin, and Justin; two great grandchildren: Addison and Quinn; and daughter-in-law Genia Richi. He was predeceased by his son Steven Birk. He was born on July 14, 1930 in St. Cloud, Minnesota. After graduating from the state’s St. John University in 1952 with a B.A. in Economics and Business Administration, Roger joined the United States Army from 1952-1954. In 1954, he joined Merrill Lynch as a margin clerk in the Minneapolis office. Roger embraced this opportunity as a chance to learn business from the ground up. This move was characteristic of Roger: studious, methodical, and orderly. His leadership abilities placed him in management training. After managing the Fort Wayne and Kansas City offices, Roger continued to rise through the ranks and he was sent to the New York office in 1968 as the Assistant Director of Operations. In 1970, he was named Division Director where he assumed the task of running operations. In April of 1974 at the age of 43, Roger was named President of Merrill Lynch, and was chosen as Merrill’s Chairman and CEO in 1981. Roger became Chairman Emeritus in 1985 and retired in April of 1986 after serving at Merrill Lynch for 31 years. During the Reagan administration, Roger was a member of the Business Roundtable , the President’s Commission on Executive Exchange, and the President’s Private Sector Survey on Cost Control. Roger was a Director of the New York Stock Exchange for which he also served as Vice Chairman. After retiring from Merrill Lynch, he was asked to help Federal National Mortgage Association (Fannie Mae), where he served as President for five years. In that capacity he had the responsibility for directing and coordinating the development and implementation of the company’s operating policies and programs. He served on the Board of Directors of Fannie Mae, Mutual of America, New Jersey Resources Corporation, Penske Inc., TW Services, and Wellpoint. Roger has been a lifetime trustee of the University of Notre Dame since 1981, chairman of the National Advisory Council at St. John’s University, President of the New York Multiple Sclerosis Society, and a member of the PGA Tour policy board. Roger was a member of Jupiter Hills and a founder of the Bear’s Club. He was passionate about golf, and he and Mary Lou loved traveling throughout the world to play golf with their close friends. They spent many summers at the Aspen Glen Club in Colorado where they had a home on the golf course at the base of Sopris Mountain. Roger will be remembered for his deep faith, love for his family, keen sense of humor, and his compassion for others. Roger’s spirit of philanthropy and desire to help others was exemplified in his personal life and through the good work that will continue with the Birk Family Foundation, which he founded in 1995. On his office desk, a framed maxim summarized his approach to life, “It is amazing what people can accomplish if they have no concern who gets the credit.” Visitation will be on Thursday, Nov. 8th from 4-6 PM at Taylor & Modeen Funeral Home, 250 Center St., Jupiter, FL 33458. A Mass of Christian Burial will be held on Friday, November 9th at 11AM at St Jude Catholic Church. 240 US Highway 1, Tequesta, FL 33469. In lieu of flowers please send donations to Treasure Coast Hospice, 1201 SE Indian St., Stuart, FL 34997 or St. Vincent de Paul, 3757 S. Military Trail, Suite 9, Lake Worth, FL 33463.

Roger E. Birk passed away peacefully on November 5th, 2018 at the age of 88 after an eight year battle with melanoma. Roger is survived by his wife of 63 years, Mary Lou, and three daughters: Dr. Kathleen Birk, Mary Colas and her husband Tim,... View Obituary & Service Information

The family of Roger E. Birk created this Life Tributes page to make it easy to share your memories.