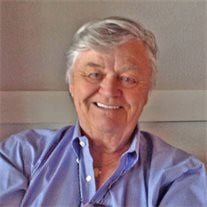 Robert "Bob" Arthur Walsh, 74, passed away surrounded by his family at Jupiter Medical Center on the morning of October 30th 2013, as a result of a series of illnesses. Bob was born an Irish Massachusetts boy. He always brimmed a wide smile, to all he greeted. His patriotism and love of his country inspired him to join the United States Air Force, where he served honorably and with distinction with the Strategic Air Command. He married Janet Eileen Brookes, in Oxford England, his wife of 54 years. She was the love of his life. He was the loving father of his two daughters, Gaynor Joy Walsh, Michelle Walsh-Huffman and son in-law Marcus Huffman. After his military service, he entered the automobile business and became a car dealer, award winning salesperson, and entrepreneur in Connecticut, Michigan and Florida. Bob was well known for his ardent love and knowledge of automobiles; it was second to none. Bob was a valiant man whose presence was bigger than life itself. Those who knew him well witnessed his generosity to those less fortunate together with the unique ability to always see the good in someone. With a twinkle in his bright blue eyes and a mischievous sense of humor, Bob was well known for the stories he told and his jovial view of life. He defined kindness, compassion, and a generous heart. His love for the Lord and all the Saints accompanied him always. It was his faith that gave him the strength to overcome any obstacle set in his way. Bob appeared invincible throughout his childhood up until his recent illnesses. He was a man who believed he must never ever give up. Bob is survived by many nieces and nephews and family, throughout the country, especially in Connecticut, Minnesota, Arizona and Washington as well as England, France and Dubai. His sister Carol Walsh-Boles, brother Edward Walsh and James Walsh preceded him in death. Visitation will be at Taylor and Modeen Funeral Home, 250 Center Street, Jupiter, Florida on Thursday November 7th between the hours of 5pm and 7pm. A Mass of the Resurrection will be held at 12 Noon on Friday November 8, 2013 at St. Christopher's Catholic Church, 12001 SE Federal Hwy, Hobe Sound, Florida. Burial will be private at Arlington National Cemetery. Donations, in Bob's name may be made to Father Flannigan's Boys Town, Nebraska.

Robert "Bob" Arthur Walsh, 74, passed away surrounded by his family at Jupiter Medical Center on the morning of October 30th 2013, as a result of a series of illnesses. Bob was born an Irish Massachusetts boy. He always brimmed a wide smile,... View Obituary & Service Information

The family of Robert Arthur Walsh created this Life Tributes page to make it easy to share your memories.

Robert &quot;Bob&quot; Arthur Walsh, 74, passed away surrounded by his...