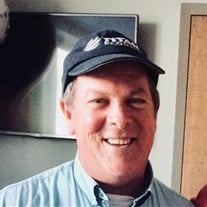 Robert Jeffrey Tuning (Jeff), 58 of Indiantown, Florida passed on Saturday, June 2, 2018. Jeff was born in Hialeah, Florida to Archie F. Tuning, Jr. (Bud) and Joyce Colavito Tuning Box. Jeff grew up and spent most of his life in Jupiter, Florida and attended Jupiter High School. He later followed in his father’s footsteps with the family plastering business, Atlantic Plastering Inc, until retirement. Jeff called Indiantown, Florida home over the past decade where he pursed his passion as a cattleman on Tuning Out Farms. He passed unexpectedly while doing what he loved on the farm. Jeff is survived by his beloved children, Amanda Campbell (Jarrett), Brooke Hartman (Eric), Caleb (Adrienne), Kiersten and step-daughter, Courtney Bichler; his grandchildren Dane, Cait, Zoë and Atticus; his mother, Joyce, his step-mother, Joan, his brother Tim (Gloria) and his step-brothers Todd, Greg, Doug and John Porter; his former wives and mothers to his children, Louanne Ljungquist and Cynthia, his girlfriend Kristina Weig, as well as his loving extended family and friends. He was predeceased by his father, Bud, and step-father Jim Box. A celebration of Jeff’s life will be held at Taylor & Modeen Funeral Home, 250 Center Street, Jupiter, Florida on Saturday, June 9, 2018 at 11:00am.

The family of Robert "Jeffrey" Tuning created this Life Tributes page to make it easy to share your memories.