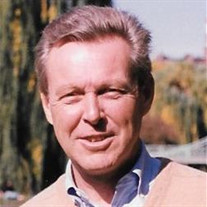 The world lost a wonderful human being and gentleman on February 21, 2018. Born in Fitchburg, MA, Bob moved to Rhode Island as a child. He attended Miami Military Academy in Florida in his teens. He then graduated from the University of Rhode Island with a Masters Degree in accounting and also completed the ROTC program while there. Bob then joined the Army, and received additional training at West Point. His service included tours in Korea, Vietnam, and Ethiopia. Bob retired from the Army as a Lt. Colonel. Bob’s second career was in finance, retiring as an Executive Vice President from Citi Bank / Smith Barney, where he was a financial consultant and manager of the Jupiter branch. Bob enjoyed life. His pleasures included boating in his Pursuit, golf, travel, keeping up with financial trends, and socializing with family and friends. Even after retirement he kept his tradition of daily lunches at Schooners, where he would join his dining buddies. He also enjoyed annual fishing trips to Ketchikan, Alaska, catching halibut and salmon with his special fishing pals. Bob also was a man of faith, trusting in his Lord to guide him. He loved attending St. Peter Catholic Church, serving as a eucharistic minister at Sunday Mass and at Jupiter Medical Center. Bob adored his family and will be missed sorely by them. He was the proud father of Jane (Paul), Anne (Craig), and Larry; and grandfather to Laura, Connor, Maddy, Craig, Madeleine, Joseph and Andrew. Bob also will be missed by brother Bill and wife Peggy, his 94 year old mother in-law Gertrude, and many dear cousins, nieces and nephews. Mostly he will missed by his wife, best friend, and soulmate, Jonnie. They cherished their life together and felt so blessed to have shared 25 amazing years. Bob was devoted, kind, generous, nurturing, trustworthy, and fun loving. Family and friends are invited to celebrate this special man’s life on Saturday, March 10th, at 11:00am at St. Peter Catholic Church in Jupiter. In lieu of flowers donations may be made in Robert Sproul’s name to his favorite charity, Catholic Relief Services (CRS).

The world lost a wonderful human being and gentleman on February 21, 2018. Born in Fitchburg, MA, Bob moved to Rhode Island as a child. He attended Miami Military Academy in Florida in his teens. He then graduated from the University of... View Obituary & Service Information

The family of Robert Hutton Sproul created this Life Tributes page to make it easy to share your memories.

The world lost a wonderful human being and gentleman on February...