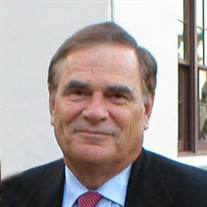 It is with our deepest sorrow that we inform you that Robert “Bob” G, Ley, 83, of Tequesta, Florida passed away peacefully on Thursday, June 4, 2020. He was born in Louisville, Kentucky to Anna Eleanor (Kaelin) and John Robert Ley. Bob is survived by his loving wife of 62 years, Ada and their three children Bob, Jr. (former wife Cindy), Ann Kohlmeyer (Clay) and Kathy Basara (Chris) as well as his sister, Gloria Ley. He was Pa to his beloved grandchildren, Kelly Kohlmeyer Williams (Quint), Bobby Ley, Christine Ley, Maddie Basara and Christopher Basara. He was also lovingly known as the “Chief”, who was a role model to multiple generations of nieces, nephews, great nieces and nephews and the partners of all. Bob’s family moved to Miami in 1946. He attended St. Theresa Catholic School in Coral Gables. He played football and made his greatest catch when he met Ada Diaz. They were married in 1958 in Coral Gables and moved to Gainesville, Florida where he attended the University of Florida and earned a Bachelor’s degree in Industrial Engineering. He was a member of the Sigma Chi fraternity and became a lifelong proud Gator. After graduation they moved to Palm Beach County where he began his 33 year tenure at Pratt & Whitney Aircraft. Bob was a true Renaissance man who enjoyed good food and great desserts while always sharing and enriching the lives of all who knew him. He loved to spend time with his family and friends. He was always ready to share, whether it was about cars, boats, plants, cooking, jobs, investments, fishing, travel or talking about his grandchildren. In lieu of flowers, the family requests donations be made to The Michael J. Fox Foundation for Parkinson’s Research at www.michaeljfox.org. We would also like to express our gratitude for his caregiver Beverly, our angel on earth and others who took loving care of Bob over this last year. Spend time with your grandchildren, take a walk on the beach with your loved ones and toast to enduring friendships, lifelong and beyond…….. This would be Bob’s wish!

It is with our deepest sorrow that we inform you that Robert &#8220;Bob&#8221; G, Ley, 83, of Tequesta, Florida passed away peacefully on Thursday, June 4, 2020. He was born in Louisville, Kentucky to Anna Eleanor (Kaelin) and John Robert Ley.... View Obituary & Service Information

The family of Robert G. Ley created this Life Tributes page to make it easy to share your memories.

It is with our deepest sorrow that we inform you that Robert...