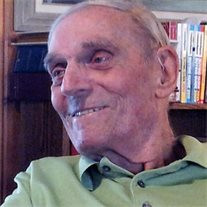 Dr. Robert Edward Grogan War Veteran, Doctor, Pioneer, Renaissance Man On June 28th, 2013, Dr. Robert E. Grogan, Jupiter's first doctor, peacefully began his eternal life with his loving family by his side at his home of 57 years. He leaves an unrivaled legacy and lasting imprint on his family and the entire Jupiter-Tequesta community. He was 88 years old. Dr. Grogan was born on April 14, 1925 in Galesburg, Illinois, to Dr. Edward B. Grogan and Charlotte Hartong Grogan. From 1943 to 1946, he served as a Lieutenant in the United States Navy after attending Officer Training School at the University of Notre Dame. During World War II, Dr. Grogan valiantly served his country in the Pacific aboard the USS Auriga, where he was the sole volunteer on a mission that helped save another Midshipmen's life. It would not be the only life he would eventually help or save. Upon returning from the War, he attended Knox College, where he lettered and starred in four sports: football, basketball, track and golf. He graduated in 1948 from Knox with a B.A. in Education and continued his schooling at the University of Louisville, where he received a M.S. in Biology in 1950 and a Doctorate of Medicine in 1956. After receiving his medical degree, "Doc" moved his family to Palm Beach County in 1956 to begin his practice. After a one year residency at St. Mary's Hospital, he opened Jupiter's first doctor's office and integrated his patient waiting room, which was controversial at the time. Doc was also instrumental in the founding of the Tequesta Country Club, and was the last, living original member. He served on the original Board and played a major role in developing the Jupiter-Tequesta Athletic Association, and First Marine National Bank, Tequesta's first bank. He also previously served as Jupiter High School's Football Team Doctor and gave free physicals to every player for three decades. Arguably, his greatest professional achievement was his involvement in establishing Jupiter's first hospital, the Jupiter Medical Center, where he served on the Board for numerous years and as Chief of Staff in 1985. Doc Grogan was an A to Z physician who cared for three generations of families in the area. He said he considered all his patients his friends. He was known for his open door policy, midnight emergency house calls, and his $5.00 office visits. Often times, he was literally paid peanuts, or with other produce or lawn services for his care. Doc had an unending thirst for knowledge and was well versed in all subjects of life. He appreciated the small, intimate details of life that most would ignore. In his later years, Doc maintained an intellectual rivalry with his family's cellphones and computers, and often won. One of Dr. Grogan's greatest passions was the game of golf, where in his prime he played with a 2 handicap. He also enjoyed the arts, writing poetry, playing the saxophone, telling good and bad jokes, and celebrating holidays with his family he so dearly loved. Doc had a core belief in always putting others before self, which is why he was beloved by so many of his colleagues, friends and family members. He is survived by his devoted wife of 42 years, Patricia Grogan, with whom he shared an unbridled love. He is also survived by nine of his ten children, Tim, Kathy, Tony, Sean, Linda, Rick, Carrie, Jenny and Danny, his brother Jim, as well as 22 grandchildren and 15 great-grandchildren. He is predeceased by his parents, his loving first wife of 26 years, Sara Proctor Grogan, his son Patrick, and his granddaughter Meghan. Visitation will be held from 2-4 P.M. and 6-8 P.M. on Monday, July 1st at Taylor & Modeen Funeral Home, 250 Center St, Jupiter. A Funeral Mass will be held 10:30 A.M., Tuesday, July 2nd, at St Jude Catholic Church, 204 US Hwy 1, Tequesta, FL. In lieu of flowers, the Grogan family requests that donations be made in Dr. Grogan's honor to Hospice of Palm Beach County, 5300 East Avenue, West Palm Beach, Florida 33409.

The family of Dr. Robert E. Grogan created this Life Tributes page to make it easy to share your memories.