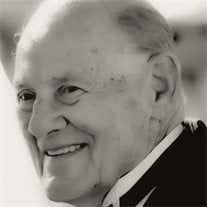 GEWINNER, Robert W. Age 90 of Jupiter, Florida, passed away on March 13, 2015 peacefully and quietly, surrounded by love from his two daughters. Mr. Gewinner was born November 22, 1924 in St. Louis, Missouri. He was preceded in death by his loving wife and life partner of 66 years, Lillie; and by his father, John Adam, mother Caroline Anna and half-brother, Henry Clay Baker. He volunteered for service in the U.S. Navy his senior year in high school and joined the Navy a few days after graduation. He served on the destroyer USS Porterfield in the famed Task Force 38/58 throughout the war. As a gunner on a 40mm AA gun, he shot down kamikaze planes and earned twelve Battle Stars plus the Purple Heart. Mr. Gewinner married Lillie M. Vaughn in 1948 and moved to Palm Beach County in 1956. They lived in Lake Park for 28 years and moved to Jupiter in 1986. He was a member of De Soto Masonic Lodge #119, A.F. & A.M. and was president of the Toastmaster's Club in De Soto, Missouri. He served on the Board of Adjustment for several years in Lake Park, enjoyed coaching girls' softball teams, and was the first president of the Home Owner's Association of the Ridge at the Bluffs in Jupiter. He also enjoyed being a BIL in his wife's P.E.O. Chapter GJ. He retired from Pratt-Whitney as a Senior Cost Analyst in 1992 after 32 years of service. Bob is survived by his devoted children: Joan (and Mitch) Osborne of Burke, Virginia; Pamela Gewinner, M.D. (and Todd Wang) of Denver, Colorado; two grandchildren, Sarah Rayner of Launceston, Tasmania, Australia, and Robby Osborne of Burke, Virginia; sister-in-law Barbara Haas of De Soto, Missouri, brother-in-law Aubrey (and Norma) Vaughn of Ft. Walton Beach, Florida, sister-in-law Marjorie L. Vaughn of Alton, Illinois, and many nieces, nephews and friends. A memorial service is scheduled for 9:00 AM on Monday, April 27, at the First Presbyterian Church in North Palm Beach, 717 Property Farms Road, followed by a reception. In lieu of flowers, memorials may be given to Southeast Florida Honor Flight Inc., P.O. Box 1503, Stuart, FL 34995. Burial will be at a later date (To be determined) at Arlington National Cemetery. (This obituary was originally written by Lillie M. Gewinner in 2005, who knew she would be in no shape to write it upon Bob's passing. We have minimally updated it to reflect recent events.)

GEWINNER, Robert W. Age 90 of Jupiter, Florida, passed away on March 13, 2015 peacefully and quietly, surrounded by love from his two daughters. Mr. Gewinner was born November 22, 1924 in St. Louis, Missouri. He was preceded in death by his... View Obituary & Service Information

The family of Robert W. Gewinner created this Life Tributes page to make it easy to share your memories.