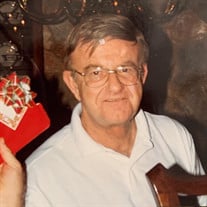 A long time resident of Stuart, Hobe Sound, and Jupiter Florida, Robert G. Fuller passed away peacefully on September 13, 2020 surrounded by his loving family, following a brief battle with cancer. Robert was born on July 25, 1939 in Westfield, Massachusetts and spent most of his youth in Connecticut. Following his graduation from high school, he served in the marine corps for four years, after which he returned home and married Carol A. Fuller. He worked for several years as a police officer in Windsor Locks, Connecticut. He raised three children and provided a comfortable life for his family. In 1985, he and his family moved to Miami, Florida where he worked for several years for AT&T in a number of capacities. Robert loved watching the Red Sox play, completing his daily crossword puzzles, and interacting with his other relatives who also resided in Florida. In later years, he and Carol moved to Hobe Sound, Florida where he and his wife enjoyed their retirement. He is survived by his wife Carol, his daughter Bonnie Shepard, and son Robert F Fuller, as well as grandchildren Alex, Andrew, and Megan. His middle daughter, Stacy Pollard, passed away a few years before. He will be sorely missed by his family and many friends. Memorials may be directed to American Cancer Association.

The family of Robert G. Fuller created this Life Tributes page to make it easy to share your memories.