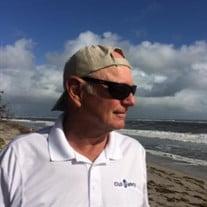 Bertrand, Robert Thomas October 25, 1948 – December 21, 2020 Bob Bertrand of Jupiter, Florida and Cape Cod, Massachusetts passed away suddenly and unexpectedly in Jupiter, Florida. Growing up in Islip, New York, Bob always loved the ocean. He became a lifeguard at Robert Moses State Park, Long Island, NY in 1967. Bob spent many summers working at RM 2 where he made lifelong lifeguard friends. He was a natural athlete and loved soccer, surfing, tennis, golf and, of course ,swimming. Bob became a pilot at Moody Air Force Base in Georgia in 1974. He then joined Otis Air Force Base on Cape Cod where he flew the Convair F-106 until 1982. He was hired as an American Airlines pilot in 1978 and worked for them until his retirement in 2008. He was the Boston Safety Coordinator for the Allied Pilots Association (APA) – 1992 Bob was a member of APA National Safety Committee from 1993-1995. His primary duties required the handling of all air traffic control capacity initiatives in Washington D.C. and surrounding areas with members of the FAA and other users of the airspace system. Bob became a Boeing 757-767 L-Type check airman from 1997-2003 initially in New York and then in Boston. He returned to line flying on the Boeing 777 in Boston from 2004 until his retirement in 2008. After retirement, Bob founded his company, Safety4Clubs distributing and teaching the use of AED’s and Lifesaving techniques. He also served as the New England regional president for USLA, the United States Lifesaving Association , from 2010-2014. He was involved with various lifeguard operations on Cape Cod. While still being involved with his business, Safety4Clubs and USLA, Bob split his time between Cape Cod and Jupiter where he swam almost every day and golfed almost as frequently. He was a proud member of the Palm Beach Masters Swimming enjoying many friendships. Bob cherished his time and the friends that he made as a member of the Wianno Golf Club in Osterville, MA as well as the Riverbend Golf Club in Tequesta, FL. Bob was predeceased by his parents, William and Dorothy Bertrand of Islip, NY and Jupiter, FL. He is survived by his beloved wife, Leona, Beloved daughter, Rebecca and his forever playmate, granddaughter, Serena. Bob also leaves his sister and brother-in-law, Barbara and John Taylor, his sister Dorothy (Dee) Bertrand and her partner Ken Leggett, and his brother and sister-in-law, William and Mary Bertrand. Bob was generous, warm and welcoming to all that he met… and would be the first to include any newcomer into his group. He was extremely loyal and supportive to his friends and especially his family. Bob leaves many dear and special friends including school mates, pilots, swimmers, lifeguards, golfers and neighbors from both Cape Cod and Jupiter. He has gone too soon and will be greatly missed. In lieu of flowers, donations can be made to USLA: The United States Lifesaving Association USLA.ORG-Donate “The USLA is America’s nonprofit professional association of lifeguards and open water rescuers. The USLA works to reduce the incidence of death and injury in the aquatic environment through public education, national lifeguard standards, training programs, promotion of high levels of life guard readiness, and other means.” A Celebration of Life event will be held at a later date.

The family of Robert Thomas Bertrand created this Life Tributes page to make it easy to share your memories.