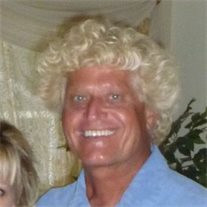 Dr. Richard W. "Doc" Smith of Jupiter, Florida passed away on May 4, 2013 after a yearlong battle with leukemia. Born in Peoria, Illinois on August 12, 1945, Richard was the second of three children predeceased by his parents Thelma and William Smith. He is survived by his wife Becky of almost 27 years, sons Trevor, Spencer, and Mason, and his daughter Morgan Scalabrino (Nicholas); two grandchildren William and Elly Scalabrino; siblings Linda Ausmus and Mary Ann Smith. Rich was dearly loved and will be missed by all who knew him. His love of God and family was undeniable. He spent his childhood in Springfield, Illinois and graduated from Springfield High School in 1964. From there he attended the University of Miami on a football scholarship and graduated in 1968 with a Bachelor of Science degree in Chemistry, and then attended Dr. Scholl's School of Podiatry in Chicago, Illinois. After graduating in 1972 with a Doctorate degree in Podiatric Medicine he did his three year residency in Chicago. From there he started a private practice in Rockford, Illinois where he practiced for thirty-five years and was known to be one of the top Podiatric Surgeons in the area. Rich enjoyed running and completed his first marathon in Rockford in 1982. He and his wife Becky finished his second marathon in St. Louis, Missouri in 1983. They enjoyed many 10K races over many years in many different cities and states. The most memorable was the Peachtree Road race in Atlanta, Georgia with 28,000 runners. Of course a prerequisite was to have a Miller Lite truck at the end of every 10K! Along with being an avid sports fan and athlete, Richard "Doc" Smith was a mentor to many young athletes, and coached baseball, basketball, and football for many years for all three sons. When not directly involved with coaching, his generous support for many athletes and young people was truly an inspiration for all. Following the Miami Hurricanes football team was a high priority in which the entire family became fans. Ski trips to Colorado were also enjoyed with family and friends. In 1993 he and his loving wife built a home in Jupiter, Florida where they moved full time in July of 2008 after selling his practice and retiring. One thing he loved was his boat the REBECCA, in which he and his wife did several escapades which included the Florida Keys and the very memorable Bahamas trip. The funeral service will be held Wednesday, May 8 at 11:00 A.M. at the Taylor & Modeen Funeral Home on 250 Center Street in Jupiter. From there we will proceed to Riverside Memorial Park on 19351 SE County Line Road for the burial, and then on to Tequesta Country Club at 201 Country Club Drive for a Celebration of Rich's life! In lieu of flowers donations can be made to the Leukemia and Lymphoma Society or Jupiter Medical Center Hospice.

Dr. Richard W. "Doc" Smith of Jupiter, Florida passed away on May 4, 2013 after a yearlong battle with leukemia. Born in Peoria, Illinois on August 12, 1945, Richard was the second of three children predeceased by his parents Thelma and William... View Obituary & Service Information

The family of Dr. Richard W. Doc Smith created this Life Tributes page to make it easy to share your memories.