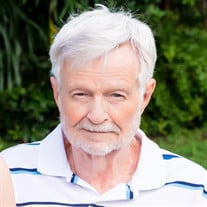 After a prolonged battle with cancer, Richard Bonard, known to family and friends as Dick, passed away on April 1, 2018 in Palm Beach Gardens, FL at the age of 87. He leaves behind his wife, Dawn Bonard of Tequesta; his daughter, Terri Bonard; his son, Richard Bonard Jr; his granddaughters, Melinda Bonard-Harstad (John Harstad), Suzanna McAninley (Jason McAninley), and Andrea Bonard (Phillip Hall); and his great granddaughters, Andrianna Harstad and Alianna Harstad. Dick was born on January 8, 1931 in Arcadia, FL to Sam and Dorothy Bonard. He grew up in the Everglades of Florida and shared many stories of his adventures growing up. He graduated high school in Everglades City, FL and soon after joined the United States Air Force and was stationed throughout the country. While stationed in Maine, Dick met Dawn Perry, a school teacher from Centreville, New Brunswick, and they married in 1956 in Vermont. Dick continued his engineering degree at the University of Florida, graduating in 1959. He accepted a job as a mechanical engineer with Pratt & Whitney in Connecticut. Shortly after they relocated to Tequesta, FL where he continued his career at the Florida branch of Pratt & Whitney. Dick was very proud of his family, he enjoyed spending time with his children and eventually accepted early retirement to be able to do more activities with his grandchildren. Dick was an avid do-it-yourselfer. Putting his engineering background to use, he enjoyed woodworking and home improvement projects. He purchased land in Okeechobee and began building his dream retirement home overlooking the Kissimmee River. Dick also believed in investing in the community and belonged to many organizations including The Shriners, Free Masons, and Scottish Rite. He greatly enjoyed the local Amara Shrine and participated in races, parades, and other events with his Tin Lizzy. He also volunteered as a hospital transportation driver for the Amara Shrine and could be found volunteering at various events with the Shriners throughout the years. Dick is survived by his wife, children, and grandchildren, as well as his brothers, Ted Bonard (Shirley) and Rodney Bonard (Elena). He is preceded in death by his parents, daughter in law, Linda Mills Bonard, and his sister Sammie Lou Falany. Dick was a beloved husband, father, grandfather, brother, and friend. He will be greatly missed. A service for Dick will be held at 12:30 pm on Tuesday, April 10, 2018 at Taylor Modeen Funeral Home in Jupiter, FL. His ashes will be inurned at Riverside Memorial Park following the service. In lieu of flowers, donations may be made in Dick's memory to the transportation fund at Amara Shrine, 3650 RCA Blvd, Palm Beach Gardens, FL 33410.

After a prolonged battle with cancer, Richard Bonard, known to family and friends as Dick, passed away on April 1, 2018 in Palm Beach Gardens, FL at the age of 87. He leaves behind his wife, Dawn Bonard of Tequesta; his daughter, Terri Bonard;... View Obituary & Service Information

The family of Richard Donald Bonard created this Life Tributes page to make it easy to share your memories.

After a prolonged battle with cancer, Richard Bonard, known to...