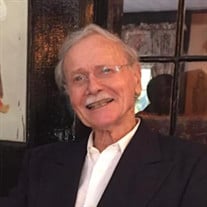 Raymond Nuytkens of Jupiter, FL, and formerly of Pleasantville, NY, passed away peacefully on February 1, 2022 after 96 years of a beautiful life well lived. He leaves his beloved wife of 69 years Carol Haight Nuytkens, his son Peter Nuytkens and his wife Margaret of Franklin, MA, daughter Pamela Davis Pagano and her husband Vince of Jupiter, FL, five grandsons, one granddaughter, and two great grandchildren. Ray was born on October 21, 1925 in Gerritsen Beach, Brooklyn, NY, son of a Belgian father and French mother. A World War II veteran, he served in the infantry in France and Germany and took part in the liberation of the Dachau Concentration Camp. When he and his platoon traveled through France, it was bitter cold and many men suffered frostbite, but not Ray. He used the tap dancing skills he learned as a youth to keep from freezing while standing watch. When he returned from the war he enrolled at Pratt Institute where he met the love of his life, Carol, and they both graduated with degrees in interior design. They moved from Brooklyn to Pleasantville, NY where they designed and built their dream house in the modernist style of Frank Lloyd Wright on a hillside, blasting away rock that they used to create beautiful stone walls lining the 32 steps to the front door. Their welcoming living room, a favorite gathering place for family and friends, was striking with its wall of floor-to-ceiling windows looking out on their beautiful view of trees, rocks and lush carpets of moss where they enjoyed watching the birds and squirrels for more than 50 years. He will always be remembered by his grandchildren for his fastidious vacuuming of the moss! Ray commuted into NY City for 36 years working in retail store planning and design. He was Vice President of Bonwit Teller and finished his career as Vice President of Hambrecht Terrell International where he designed stores for Saks Fifth Avenue, Bloomingdales, FAO Schwartz, and Marshall Fields, as well as other stores around the world including in London, Asia, and Australia. He continued his long family tradition of sailing, buying an Ensign sailboat when his children were very young and naming it for them, the Peter-Pam, with a nod to eternal youth. It was the center of many family adventures as he sailed it for more than 40 years on Long Island Sound. He and Carol loved ballroom dancing and were always the first on the dance floor – the Rainbow Room at Rockefeller Center was a particular favorite. They also loved swimming and riding the waves at East Hampton and cross-country and downhill skiing in NY and Vermont. He was a fitness buff and loved to walk—at a pace that was tough for most everyone to keep up with! Ray was active in the Chappaqua Congregational Church where he was committed to giving back by serving others. Always an optimist with a zest for life, his most frequent conversational remark in his last months was, “It’s been a good life, so what the hell!” A Celebration of Life service is being planned for the spring or early summer.

The family of Raymond C. Nuytkens created this Life Tributes page to make it easy to share your memories.

Raymond Nuytkens of Jupiter, FL, and formerly of Pleasantville,...