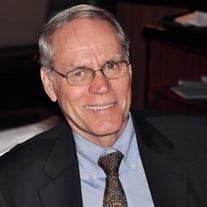 Ransom F. Gladwin III (Skip) was born on October 18, 1942 and passed away on December 21, 2020. The Gladwin family was part of the second wave of Jupiter, Florida pioneers and they lived, at first, in what is today the historic DuBois Pioneer Home at Dubois Park. The family later moved to Pennock Point, where Skip would spend most of the rest of his life. Pennock Point, in those early years, was a land of ferns, wild rabbits, and unexplored woods. He spent his days building wooden bows and arrows, finding gopher tortoises, and building his beloved go-carts to race around the Point. In the earliest days Skip went to school barefoot and by canoe. He always loved to tell stories of early Jupiter; it was a paradise for him that he loved and wanted others to appreciate, as he collected and gathered history of that time throughout his life to share with others. Some of his most cherished memories were summers when his beloved New Jersey cousins would come down and visit. He had endless tales of swimming in the river, canoeing, and roaming around the then ever-present wild and wonderful South Florida scrub. Today his extensive historical collection is on permanent loan as the “Gladwin Family Collection” with the Loxahatchee Historical Society, where a Gladwin room will be created at the Jupiter Inlet Lighthouse and Museum for exhibition and research. Donations may be made in his name to support this effort. As a teenager, Skip was very involved in the Civil Air Patrol in Stuart, Florida, where he was commander of the cadet squadron. Skip graduated from Palm Beach High (now Dreyfoos School of the Arts) in 1960. In his Senior English class, he met his eternal rose, Rosalyn Redding, from West Palm Beach. They would date at Palm Beach Junior College. He went away to the University of Florida to earn a degree in Mechanical Engineering and an MBA, while Rosalyn went to Florida State University to earn an Elementary Education degree. Skip would joyfully recall the many hours he spent driving from Gainesville to Tallahassee to visit Rosalyn. They married in 1964 at the First United Methodist Church of West Palm Beach (now the Harriet Himmel Theater). They would move to Jupiter, Florida and Skip would build his own homestead on his beloved Pennock Point, where he and Rosalyn would raise their two boys, Ransom Ferdinand Gladwin, IV (Randy), and Ryan Redding Gladwin. Skip joined his father’s firm, Gladwin & Bassett Construction, for many years before founding his own firm, RFG General Contractors. Skip believed deeply in giving back to the industry one works in and was long involved with the Association of General Contractors. He was president of the Florida East Coast Chapter in 1985 and was awarded the prestigious S.I.R. Award in 2014 by the chapter for life-long achievement and service in the construction industry. RFG General Contractors would build homes primarily on Jupiter Island. In his words, Skip said, “I have been blessed to spend my entire lifer working for the finest people imaginable, building their beautiful homes, on an island that I love.” Skip was a lifelong, dedicated United Methodist, who built the current sanctuary of the First United Methodist Church of Jupiter, Florida on Indiantown Road. His faith was always deeply important to him and he instilled this love of Jesus in both of his boys. He, like John Wesley, believed in hard work and that one should gain all he can, save all he can, and give all he can. He is remembered by many for his generosity and support of many organizations and many people, publicly and privately. He had a special place in his heart for Christian mission work, as he supported missionaries and organizations in the U.S., Europe, and Latin America. Skip had an avid love for Spanish-speaking peoples and encouraged his sons to learn the language and serve in missions in Spain and Mexico. This love continues today in the life of his son Randy, who is a professor of Spanish and English as a Second Language (ESOL), and his son Ryan, who has served in ministry in Latin America and among the Hispanic community in the U.S. He was a man who had a dedicated prayer life and would rise very early each day to pray, not just for himself, but for his family and others. He truly believed that work was a gift from God and that despite his awareness of pain in this world, the simple things are what make life worth it – being at home, being around his boys and their families, and being with his wife. This is where he was truly happiest in this life, as he caught glimpses of Heaven beyond. Skip was a dutiful, generous, kind, man, who kept his word. Even those who may have disagreed with him, always admitted that, “Skip Gladwin is a good man.” He was preceded in death by his father, Ransom Ferdinand Gladwin, Jr. and his mother, Ann Lunger, his sister Geraldine, and his brother Stephen. He is survived by his wife Rosalyn Redding, sons Ransom and Ryan, their spouses Céline (Byblos, Lebanon) and Natalia (Zárate, Argentina), grandchildren Eva, Randa, Lucas, and Jebran, and his brother, Dan (Brenda), and sister Gail (Kyle) and his nieces and nephews and their families. His funeral service will be at the First United Methodist Church of Jupiter-Tequesta at 11am on December 30th and simulcast on the church’s YouTube channel, and there will be a drive-through visitation at 12:45PM in the east church parking lot.

Ransom F. Gladwin III (Skip) was born on October 18, 1942 and passed away on December 21, 2020. The Gladwin family was part of the second wave of Jupiter, Florida pioneers and they lived, at first, in what is today the historic DuBois Pioneer... View Obituary & Service Information

The family of Ransom F. Gladwin created this Life Tributes page to make it easy to share your memories.