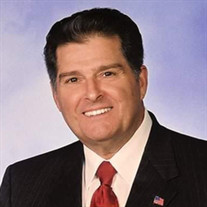 Rev. Ralph R. Volpe Sr., 84, of Jupiter, Florida (formerly of Houston, Pennsylvania), was graciously received into the arms of the Lord Jesus Christ on September 19, 2020 in his home. Ralph was born May 25, 1936 in Greenville, Pennsylvania, a son of Michael & Mary Jane Volpe. On August 19, 1956 he married A. Carolyn Foy who passed away in 2019. At the age of eighteen Ralph answered the call of God to the full-time ministry and never looked back. He began his ministry in northwestern Pennsylvania where he was led to plant Bethel Assembly of God Church in Girard. In 1968 he and his family of six relocated to Houston, Pennsylvania where Ralph assumed the pastorate of Central Assembly of God Church. His 36 years pastoring Central were the joy of his life. Pastor Volpe, as he was known by most, loved the church, the people, the surrounding communities, and Washington county at large. He lived with tireless passion to carry out God’s plan and shared a vision for ministry and Kingdom growth that would only come to pass by faith in God’s power and miraculous hand. Of course, Pastor Volpe couldn’t and didn’t do this alone. He gladly served shoulder-to-shoulder with his wife, Carol, along with hundreds upon hundreds of dedicated and wonderful people over the years, both inside and outside the church, to see the heavenly vision come to reality … The Miracle on McGovern Road! One by one, people and families found hope and life in Christ at Central which became a Gospel sending station with hundreds going into lay and full-time ministry across the country and around the world. Space does not permit the recollection of all the amazing things that the Lord accomplished and continues to do through Central Assembly of God! Along with pastoring, Ralph was a devoted husband to Carol and father to his children. He and Carol provided a loving home where God was first and everything else followed. Family life was centered around the joy of knowing Jesus and serving the Lord and others and closely tied to exciting church-life which created the opportunity for Ralph, Carol, and the children to build wonderful and lasting friendships with so many. Surviving to cherish his memory are three sons, Ralph ‘Rick’ Volpe Jr. (Debbie), Robert Volpe (Cindy), and William Volpe (Paula), and a daughter, Carolyn Burns (Steve), who all reside in Florida; ten grandchildren, Michael (Erica), Ashleigh (Johan), Kristin (Jonathan), Angela (Lance), Rachael, William Jr. (Nicole), Andrew, Alex (Amanda), Nicole, and Jeffrey; three step-grandchildren, Mia (Adam), Joshua, and Jordan (Jaden); nine great-grandchildren, Jude, Christian, Caleb, Lia, Xander, Michael, Harlee, Porter, and Valentina; a brother, Robert G. Volpe, and a sister, Joan Volpe, both of Greenville, Pennsylvania. Ralph’s parents are deceased. As Pastor Volpe often declared and now fully knows, “Keep your ‘Son’ glasses on because your future in Jesus Christ is getting brighter and brighter!” A Viewing will be held on September 28, 2020 from 2 PM to 4 PM and again from 6 PM to 8 PM at Taylor & Modeen Funeral Home, 250 Center Street, Jupiter, FL 33458. A Funeral Service will be held on September 29, 2020 at 10:30 AM at Christ Fellowship Chapel, 5312 North Lake Blvd., Palm Beach Gardens, FL 33418. Interment will follow at Riverside Memorial Park, Tequesta, FL In lieu of flowers, memorial donations may be made to Central Assembly of God Church, 155 McGovern Road, Houston PA 15342

Rev. Ralph R. Volpe Sr., 84, of Jupiter, Florida (formerly of Houston, Pennsylvania), was graciously received into the arms of the Lord Jesus Christ on September 19, 2020 in his home. Ralph was born May 25, 1936 in Greenville, Pennsylvania,... View Obituary & Service Information

The family of Ralph R. Volpe Sr. created this Life Tributes page to make it easy to share your memories.