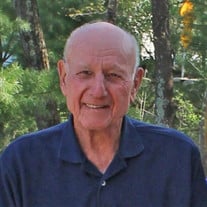 Philip F. Wisnewski passed away peacefully surrounded by his family on July 21, 2019. Philip was born in Elmhurst, NY on July 27, 1926 to his late parents Stanley and Mary(Samluk) Wisnewski . Philip is survived by his loving wife Dorothy (Prosnak) Wisnewski . He also leaves his daughters April Davis of Jupiter, FL ( fiancé Steve Wasler), Diane Gross of Saugus, CA ( husband Michael). He was predeceased by his son Philip F. Wisnewski. He leaves also a daughter and son in law Jean and Mark Pochebit of Barrington, RI. Philip is survived by seven grandchildren (Meghan Rogers, Sarah Costa, Erica Kurowski, Morgan Pratt, Philip Davis, Kerri Handel and Geoffrey Davis) and was predeceased by his granddaughters Alison M. Pochebit and Ashley A. Wisnewski. He leaves behind 8 great grandchildren. “ Poppi” as he was known to family was loved and adored by all his grandchildren and great grandchildren. He also leaves several loving nieces and nephews. Philip is the brother of the late Louis Wisnewski, and the late John Wisnewski. He is survived by his sister Jean Wisnewski Maier . Phil enjoyed a long career as a member of the New York City Fire Department and retired as a Captain. He was very proud of his service as a fire fighter. Phil was also a veteran of the US Air Force and was stationed in Germany during WWII. Phil had a love for the water and loved sailing and fishing of any kind. He spent many days on Long Island sound racing his “ Lightening” with friends and family. After relocating to Naragansett, RI in his retirement he continued clamming and finding any reason to enjoy the beautiful shoreline. Spending winters in Florida, Phil enjoyed swimming and golfing as much as possible. Dorothy and Phil were married for 69 years and enjoyed their retirement years between RI and Florida always surrounded by friends and their loving family. Everyone that knew Phil will miss his sense of humor, his quiet way and his endless support. A celebration of Philip’s life will take place at St. Jude’s Roman Catholic Church at 10:30AM Mass on Tuesday July 30, 204 US-1 in Tequesta, FL.

Philip F. Wisnewski passed away peacefully surrounded by his family on July 21, 2019. Philip was born in Elmhurst, NY on July 27, 1926 to his late parents Stanley and Mary(Samluk) Wisnewski . Philip is survived by his loving wife Dorothy (Prosnak)... View Obituary & Service Information

The family of Philip F. Wisnewski created this Life Tributes page to make it easy to share your memories.

Philip F. Wisnewski passed away peacefully surrounded by his...