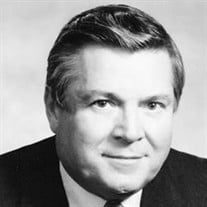 Peter J. Velardi, age 86, passed away Monday, May 14th in Jupiter, Florida surrounded by his loving family. Peter will be remembered as a “larger than life” role model - a man of integrity committed to his wife, family, career, and friends. Peter was the retired Chairman and CEO of Vanity Fair Mills, at that time the nation’s leading manufacturer of Intimate Apparel. Peter was born to Salvatore and Marie Velardi in Flushing NY on Sept 2, 1931. After graduation from Flushing HS, he began his career with Vanity Fair in 1949 as an office boy in their NY office. As he attended NYU in the evening, he progressed in his career while obtaining his advanced education. After his service in the Korean War, he advanced through various sales territories at age 36, when he was appointed to National Sales Manager of Vanity Fair. He was promoted to VP Marketing, Executive VP, President in 1983, and finally Chairman and CEO in 1988. He retired in 1994 after 45 years of service at Vanity Fair. He has been a permanent resident of Jupiter FL. since 1994, and a part time resident since 1987. He and his family resided in Westport CT. for 27 years during his career in NY. He is survived by his wife of 65 years, Angelina (Lee), and his 3 children; Donna Velardi Harran (Harry) of Jupiter, Peter S. Velardi (Janine) of Atlanta, and Steven M. Velardi (Saniya) of San Francisco and his sister Camille Glad of NY. He was proud to have spent so much time with his 4 grandchildren, Peter A. Velardi, Nick J. Velardi, Serena M. Velardi and Melissa G. Harran– all of Atlanta. A long time member of Jonathan’s Landing Golf club, he served on their first Board of Directors. While living in Westport CT., he was a member of Westchester CC. His passion for golf and boating also led to his service on the board of the Jonathan’s Landing Yacht Club. As a founding Board member of Gilda’s Club charity in NY. He then served the same capacity when the South Florida Gilda’s Club was formed. He was proud of the success Gilda’s club has achieved supporting families of cancer patients. One of his recent achievements he was also very proud of was the completion of his book, 45 Years in Ladies Panties, by Peter J. Velardi and Marcus Webb (available on Amazon). For readers, it provides an entertaining journey through his life as an executive and thought leader in the hay days of the apparel industry with many life lessons along the way. For him, it was a way to leave a legacy - a story that will have a life and impact others well beyond his. Most of all, he always felt his greatest accomplishment was his commitment and love for his family and friends. Whether it was his marriage of 65 years to his high school sweetheart, time spent with his kids and grandkids, or time on the golf course or ballgame with friends - his family and friends were the center of his life. Visitation will be held from 4:00 - 7:00 pm on Sunday, May 20 at Taylor & Modeen Funeral Home, 250 Center Street, Jupiter, FL 33458. Peter’s Funeral Service will be held at 10:00 am on Monday, May 21 at St. Jude Catholic Church, 204 US Highway One, Tequesta, FL 33469. Interment will follow in Riverside Memorial Park, Tequesta, FL. Luncheon will immediately follow at the Jonathan’s Landing Golf Club, 16823 Captain Kirle Dr., Jupiter, FL 33477. Contributions in Peter’s memory can be made to the Salvation Army.

Peter J. Velardi, age 86, passed away Monday, May 14th in Jupiter, Florida surrounded by his loving family. Peter will be remembered as a &#8220;larger than life&#8221; role model - a man of integrity committed to his wife, family, career, and... View Obituary & Service Information

The family of Peter Joseph Velardi created this Life Tributes page to make it easy to share your memories.