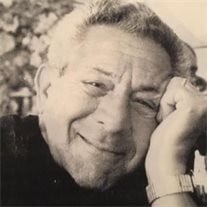 Pasquale Salvatore Franco ("Pat"), 86, of Palm Beach Gardens, passed away peacefully on March 16, 2015. Pat was born on October 13, 1928 in Summit, New Jersey to Gerardo Franco and Assunta Iorio. Pat proudly served in the United States Army during the Korean conflict as a combat soldier. Pat lived most of his life in Brooklyn, NY, where he lived an honest life, and worked hard day and night to take care of his family. He will be remembered most for his charming and witty personality, always, even up to the time of his passing, making us laugh. He was also known for his love of the outdoors, his devotion to his family, and his artistic talents. Pat leaves behind his wife, Beverly Burchell; sister, Rita Miller; brother, Salvatore Franco; children, Michael, Susan and Franny; grandchildren, Anthony, Nicholas, Dawn, Julie and Jennifer; and seven great-grandchildren, all of whom he adored. He also leaves behind many nieces and nephews who were always there for him. He is preceded in death by his first wife, Carmella Franco. A memorial gathering will be held on Friday, March 20, 2015 from 3:00 to 6:00 PM at Taylor & Modeen Funeral Home, 250 Center Street, Jupiter, FL. A memorial mass will be held on Saturday, March 21, 2015 at 10:00 a.m. at the Cathedral of St. Ignatius Loyola, 9999 North Military Trail, Palm Beach Gardens, FL 33410.

The family of Pasquale Salvatore Franco created this Life Tributes page to make it easy to share your memories.