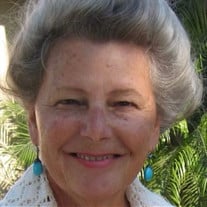 Norma Jane Gaspari, 82, of Tequesta, FL, peacefully passed away on Thursday, October 15, 2020 at her home with friends and family by her side after battling pancreatic cancer. Norma was born and raised in Pontiac, MI on December 13, 1937 to Joseph Wesley and Regina Sokol. She attended Michigan State University and obtained a horticulture degree. After moving to Toledo, OH, she met and married the love of her life, John E. Gaspari on September 24, 1960, sharing a wonderful marriage of over 50 years. In Ohio, she devoted herself to raising their family, she became a realtor and was a member of Million Dollar Club. She was an avid antique collector and owned her own antique shop for years. Her biggest passion was gardening. After retiring to Tequesta, FL, she became an active member of the Tindall House Restoration, the Loxahatchee Guild, Jupiter Lighthouse and volunteered her time generously in the Jupiter area. Norma was a loving and caring wife, mother, grandmother, sister and mother-in-law. To everyone she will be remembered for her zest for life and living every day to its fullest. She enjoyed gardening, riding her bike in Jonathan Dickenson State Park, listening to country music, and going out with all her many friends. She loved watching football and cheered for the Cleveland Browns and Michigan State (GO SPARTANS!). She had a gift for making anyone feel at home and loved! Norma is survived by her two sons and their wives David Gaspari, his wife, Ksenia Gaspari, and Jack Gaspari and his wife Jayne Gaspari. As well as five grandchildren Anna Gaspari, Joseph Gaspari, Abby Gaspari, Marina Gaspari and Olivia Gaspari, her sisters Jean Hess and Joann Kitzman, and brother Frank Wesley; along with many loving friends. In lieu of flowers, the family requests, in honor of Norma Gaspari, much appreciated charitable donations should be made to The Loxahatchee Guild 501 (3C) Charitable Organization Promoting Historical Preservation, Box 4544, Tequesta, FL 33469.

Norma Jane Gaspari, 82, of Tequesta, FL, peacefully passed away on Thursday, October 15, 2020 at her home with friends and family by her side after battling pancreatic cancer. Norma was born and raised in Pontiac, MI on December 13, 1937 to... View Obituary & Service Information

The family of Norma J. Gaspari created this Life Tributes page to make it easy to share your memories.