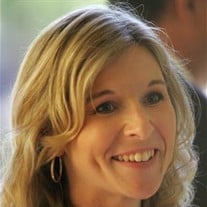 Nicole Arnold passed away on Monday, August 27th, 2018 …. And life for us will never be the same…… Nicole is survived by her loving husband of 21 years, Scott; by her children; Kaitlyn,18; Olivia, 14; and Alexis, 7. Her mother and stepfather, Diana and Herschel Helton; Her adopted father and his wife, Henry and Gail Snipes; her birth father, Max Kistner; her sister and brother in law, RyAnn and Chad Harkless; 2 brothers, Chad Kistner and Taylor Snipes; her grandmother, Colleen Barnes; several nieces and nephews and many members of the Arnold family. Nicole was born on September 13th, 1971 in Lake Wales Florida. As one of 4 children, she is described as a goody two shoes, always trying to keep everyone out of trouble. In high school she was on the cheerleading squad. She met the love of her life Scott at a Campus Bible Study. When her mother met Scott at a football game, she said that's the man you're going to marry. She graduated from Frostproof High School and went on the East Tennessee State University to complete a bachelors degree. This is also where she could cheer on her beloved Tennessee Volunteers. She married Scott and moved to partner in ministry with him as they served together faithfully at Morganton First Church Of God in Morganton, NC where Nicole was a cheerleading coach for Freedom High School. Upon moving to Florida to serve together at Church In The Gardens when Kaitlyn was 3 months old, she devoted herself to her family and her home. Olivia was born 4 years later and Alexis completed the family in 2011. Nicole poured her life into her children and her husband. She was a wonderful wife, full of grace and dignity. Nicole had a passion for worshipping God, a woman strong in her faith. She served the women's ministry at Journey Church with great love and dedication, paying attention to every detail to be an encouragement to all. She will be remembered by family and friends as an example of love and kindness like no other. A funeral service will be held at First Baptist Church of Tequesta, 423 Tequesta Drive, Tequesta, FL 11:00 am Saturday, September 1, 2018 with a viewing beginning at 10:00am. Burial will follow in Riverside Memorial Park, Tequesta. A reception will be held at Jupiter Christian School following the burial. Online condolences may be offered at www.taylorandmodeen.com

The family of Nicole S. Arnold created this Life Tributes page to make it easy to share your memories.