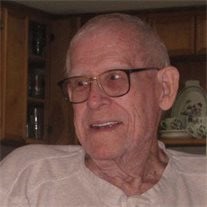 Neal Edwin Webster Sr. Neal E. Webster Sr. 90 years old, passed away peacefully on Sunday December 5, 2010 at Hospice of Palm Beach County. A lifelong resident of Kalamazoo, Michigan, Neal spent his last year in Tequesta, Florida with his daughter and her family. Born on August 22, 1920 to Edna and Lawrence Webster, Neal was better known to his family and friends as “Moose” a nickname born from his days of playing baseball. He served his country in World War II and proudly served as Chaplain for the Plainwell Michigan Veterans of Foreign War Post for many years. He was recruited to play baseball by many local companies in Kalamazoo during the hay day of the Industrial League system. Neal was drafted by the St. Louis Cardinals in 1940 and played in their farm system prior to going to the war. He pitched for the Sutherland Paper team when they won the 1951 American Baseball Congress National Championship. Following his retirement from Sutherland after 42 years of service, he spent a number of years caring for his brother who suffered from Alzheimer’s. He shared his later years with his loving partner Katy who added years to his life with her love and energy, caring for him as long as she was able. He was preceded in death by his wife, Johanna Christina Webster, his parents Edna and Lawrence Webster, his brother Donald Webster and many Aunts, Uncles and brother and sister in-laws that were dear to him. Family was everything to him and he is survived by his six children, Mary Jo of Lawrence, MI, Neal Edwin Jr. of Phoenix, AZ, Nancy of Plainwell MI, Lyle (Ann) of Otsego MI, Patti Hamilton (Charlie) of Tequesta, Fl and Amy Little (Jack) of Ithaca NY. He dearly loved his grandchildren, Jennifer, Alison, Amber, Greg, Jacob, Kristy, Christian, Reed, Parker, Madison, Johanna and Halee and his great grandchildren Gregory, Courtney, Megan, Rashelle, Jacob and Ethan. A Memorial Service and celebration of his life will be held at the Episcopal Church of the Good Shepherd 400 Seabrook Road Tequesta, December 10, 2010 at 3 p.m. Interment will be held at a later date in Plainwell, Michigan. In honor of his love for youth baseball and the Youth Mission at Good Shepherd, the family asks that in lieu of flowers, donations be made to The Church of the Good Shepherd for the Youth Mission Trip or the Jupiter High School Baseball Team in his honor. For directions and online condolences, please visit www.taylorandmodeen.com. Taylor & Modeen Funeral Home Family Owned & Operated (561 744-2030, Jupiter, FL

The family of Neal E. Webster created this Life Tributes page to make it easy to share your memories.