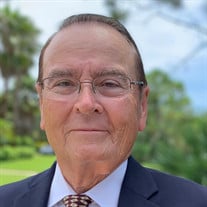 Michael Leroy Phillips departed this mortal life on June 24, 2020 surrounded by his loving family. To the countless family and friends whose lives Mike touched in his 72 years, life will never be the same. Mike was born in West Palm Beach, Florida on September 21, 1947. He was the son of Mary Lee Joyner and Charles Ruth Phillips. He was preceded in death by his parents, his brother William Scott Phillips, his sister Lucille Beatrice Dover, and his brother Edward James Phillips. He is survived by his brother, Charles Russell Phillips. He leaves behind his beloved wife, Magdalena, of 49 years, his son Dr. Michael Charles Phillips and his wife Jennifer Phillips and their children Molly, Lily, and Charlie. He is also survived by his daughter Lilia Magdalena Kozell, her husband Richard Kozell, Esq. and their two children, Rosie and Jackson, along with many other relatives and friends. Mike was a lifelong member of the Church of Jesus Christ of Latter-day Saints and raised his family accordingly; always having a strong testimony of Jesus Christ. He was a native of Florida and resided in Jupiter for over 47 years, except for a brief period of time when he attended Brigham Young University and Louisiana State University. While attending BYU, he was called to serve as a missionary for the church. He was trained to teach the Gospel of Jesus Christ and served in the Mexican mission for two years, during which time he mastered the Spanish language and had many unique experiences. At the end of his mission, he met his “Amor” Magdalena. They subsequently married and started their family here in Florida. In his career, Mike was a community banker in Palm Beach, Martin, Okeechobee, and St. Lucie counties. In this capacity, he helped many local small businesses get their start. Following his retirement from banking, Mike was the volunteer coordinator for El Sol, Jupiter Community Resource Center, where he helped to organize volunteer efforts and activities for the community. Mike truly believed in and practiced his favorite scripture verse from the Book of Mormon, Mosiah 2:17 that states, “When ye are in the service of your fellow beings ye are only in the service of your God.” In his free time, Mike enjoyed many volunteer activities. He was a member of the Kiwanis Club of Jupiter-Tequesta for over 30 years and served as club president twice. He would often speak with great pride of the many Kiwanis projects which impacted the lives of others, such as the Dictionary Project that was designed to improve literacy in grade school children in Jupiter and Tequesta. He also was a long time translator of church services for Spanish speaking congregants. He made every effort to help anyone who was in need. He was a friend to all and considered a father figure by many. Mike also enjoyed many activities like fishing, boating, gardening and hosting innumerable family gatherings. He felt that his greatest accomplishment, however, was raising a loving family and spending time with them. No family has ever been more proud of their patriarch than the family Mike leaves behind. And perhaps no man has ever given more of himself than our beloved Papa. In lieu of flowers the Phillips family requests that donations be made to El Sol Jupiter Community Resource Center at ww.friendsofelsol.org. DUE TO THE COVID 19 PANDEMIC, THE FUNERAL SERVICE MONDAY WILL BE PRIVATE FOR FAMILY AND INVITED GUESTS ONLY. VISITING HOURS SUNDAY AT THE FUNERAL HOME ARE OPEN TO THE PUBLIC

Michael Leroy Phillips departed this mortal life on June 24, 2020 surrounded by his loving family. To the countless family and friends whose lives Mike touched in his 72 years, life will never be the same. Mike was born in West Palm Beach, Florida... View Obituary & Service Information

The family of Michael Leroy Phillips created this Life Tributes page to make it easy to share your memories.