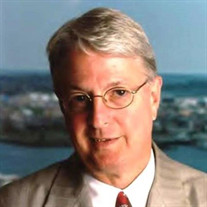 Michael Peter DeFanti, 80, of Palm Beach Gardens, Florida, and Barrington, Rhode Island, passed away on April 11, 2022. Michael, known to friends as “Mick,” was born on January 22, 1942, to Joseph and Jessie DeFanti in Westerly, Rhode Island. He graduated from the University of Rhode Island in 1956. He studied Philosophy at Brown University and then received his J.D. from Boston University in 1969. Following law school, Michael worked as an attorney at Hinckley Allen, where he spent his entire career. He became a partner in 1975. Michael enjoyed a distinguished legal career with practices focused on corporate and commercial litigation, trying cases in front of the Rhode Island state supreme court. Michael was nominated and became a Fellow of The American College of Trial Lawyers. Michael served as the managing partner of Hinckley Allen for the last eleven years of his career till his retirement in 2008. During this time, he oversaw the growth and expansion of the firm with offices throughout New England. While passionate about the law, he took great joy in helping his partners achieve the best within themselves. In 1960, he met his wife, Anne, known to friends as “Chip.” They married in 1967 in Providence. Michael and Anne have two sons, Mark and Adam. Mick and Anne traveled the world during their fifty-three years of marriage, embracing numerous adventures and a life filled with family, friends, laughter, and good food. Mick will forever be remembered as a wonderful and caring husband, father, and grandfather. His generosity, intellect, wisdom, sage advice, and quick wit inspired the people close to him. He leaves a legacy of always helping those in need with modesty. Michael is survived by his wife, sons, and siblings, David DeFanti, Sharon Olean, Stephen DeFanti, Jad DeFanti, and four grandchildren, Helena, Sofia, Maxwell, and Isabella DeFanti. A funeral mass for Michael will be held at St Patrick Church in Palm Beach Gardens, Florida, on April 22, at 10 a.m., A Celebration of Life will be held at Rhode Island Country Club in Barrington, Rhode Island, on May 13 at 2 p.m. Please consider a donation to the Montana Ballet Company in lieu of flowers.

The family of Michael Peter DeFanti created this Life Tributes page to make it easy to share your memories.