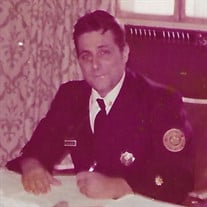 Michael W. DeBlasio age 86 of Jupiter, Florida, passed on to be with the Lord Jesus Christ on September 3rd at 2:28 AM at Memorial Regional Hospital, Hollywood, Florida. He was a retired Chief of Operations for the New York City Department of Corrections who also dedicated his life to his family. Michael was born in Brooklyn, New York and was the son of Rose and Alfred DeBlasio. Michael had only one sister who he dearly loved, Marie Cutillo. Michael started his career as an officer at the Old Raymond Street Jail. Back then no one wanted to be in that jail. He was then promoted and became a Captain in the New York City Manhattan House of Detention (The Tombs) where he was a part in the hostage crisis negotiating for the officers release during the riots. He continued his active and wonderful career as the Assistant Deputy Warden for the Brooklyn Court Division and continued to be recognized by all for the brilliant and brave man he was. Michael continued to move up the ladder and became Assistant Chief of Operations for the department and was at various times not only Chief of Operations when needed but even Acting Commisioner for the Department of Corrections when the Commissioner would need him in his stay. Michael and his wife, Josephine enjoyed going to Atlantic City, Las Vegas and many other places as well as keeping company with their life-long friends. What Michael loved and wanted most of all was to spend time with his entire family. Michael had 3 beautiful children, his beautiful daughter and eldest child Rosemarie, who was his little Lolly his whole life long, his 2 sons Alfred and Michael and his five grandchildren, Phillip and Christopher Kempisty, Matthew and Lia DeBlasio, Michael W. DeBlasio II and one great grandchild Christopher Kempisty II. A visitation will be held on Wednesday, September 9th from 12 PM to 2 PM and from 4 PM to 6 PM at Taylor & Modeen Funeral Home, 250 Center St., Jupiter, FL. The funeral will be held on Thursday, September 10th at 11 AM at Taylor & Modeen Funeral Home followed by an entombment at Our Lady Queen of Peace Catholic Cemetery, Royal Palm Beach FL. For directions or online condolences visit www.taylorandmodeen.com.

Michael W. DeBlasio age 86 of Jupiter, Florida, passed on to be with the Lord Jesus Christ on September 3rd at 2:28 AM at Memorial Regional Hospital, Hollywood, Florida. He was a retired Chief of Operations for the New York City Department... View Obituary & Service Information

The family of Michael DeBlasio Sr. created this Life Tributes page to make it easy to share your memories.

Michael W. DeBlasio age 86 of Jupiter, Florida, passed on to...