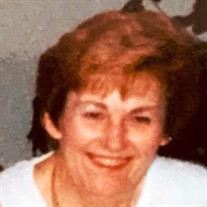 Mary Carol (Moran) Woll, of Greenacres, FL passed away on Sunday, April 26th after an extended illness, with her loving children and their families at her side. Carol was born in Pittsburgh, PA on June 3, 1944 to Robert Joseph and Lilian Mary (Donahue) Moran. She was the eldest of their 5 children and the only daughter. One of her greatest wishes in life was to have two daughters, having not had a sister of her own. Carol leaves behind her three beloved children, daughter Toni Diana Caulkins (Bruce), daughter Jeanine Marie Ocharan (Luis), son Brian Patrick Woll (Tiffany) three grandchildren; Nicholas Fink, Baylee Woll, Aden Woll and one great grandson, Harrison Fink. Carol is also survived by her four brothers Robert (Mary Ann), David (Janna), Gregory (Susan), Leonard Moran and numerous Nieces, Nephews, Cousins and Family Friends. After high school, Carol briefly left Pennsylvania to work in Virginia with the FBI, but returned to marry Roger Laddie Woll in December 1967. Over the next twenty-one years, her adventures were just beginning as she devoted herself to being a Mother, homemaker and later as crossing guard for her children’s schools. Carol returned to Pittsburgh to be closer to her mother who preceded her in death in 1995, and her brothers, but when all her children, were again living near each other in Palm Beach County, she knew that was where she belonged. She retired from PNC Bank, bought a condo and packed her belongings, moving to Greenacres in 2004. However, retirement was not for Carol, she had too much life left to live and a need to feed/fund her BINGO addiction. Carol went to work for Publix (023) on Forest Hill Blvd as a cashier. She enjoyed making new friends, meeting new people every day and always striving to raise the most funds for the Publix charities. When not taking care of her beloved grandchildren, Carol could be found at her favorite Bingo halls playing as many cards as possible. This was a hobby she had enjoyed since the early 1980’s and in her final months was very sad to have to give up. She was a devoted mother and a loving grandmother who was always there when needed. A friend, always available to lend an ear and offer her support. She will be deeply missed, our solace is that we know she is with her loving parents, aunts, uncles and other family that have passed before her. “Death leaves a heartache no one can heal; Love leaves a memory no one can steal” Because of the current world situation, a memorial will be held at a future date and internment with her parents in Glenshaw, PA. Her family would like to thank the wonderful staff from Vitas Hospice for the compassion and care provided these last weeks to both Mary Carol and her extended family.

Mary Carol (Moran) Woll, of Greenacres, FL passed away on Sunday, April 26th after an extended illness, with her loving children and their families at her side. Carol was born in Pittsburgh, PA on June 3, 1944 to Robert Joseph and Lilian Mary... View Obituary & Service Information

The family of Mary Carol Woll created this Life Tributes page to make it easy to share your memories.