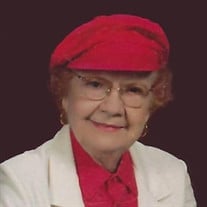 Mary Belle Coulter July 28,1920-January 9, 2020 Mary Belle Coulter, of Vero Beach, Florida, passed away at age 99 on January 9, 2020. She was born in West Point, Kentucky (near Louisville). Mary Belle Roby married Jack Coulter in December 1941, before he deployed to Europe in World War II, and she worked as a draftsman on Army maps while he was gone. In 1953 they moved to Miami, where Jack worked in the Estate Tax Division of the IRS, and Mary enjoyed being a wife and mother to Ben, their only child. For most of her adult life, she was an accomplished artist, specializing in beautiful paintings of the Everglades. Her mentor was famous Florida artist, A.E. “Beanie” Backus, of Fort Pierce. She won numerous awards for her paintings, most noteworthy “Best in Show” at the renowned Sunday in the Park with Art (1987) at the Deering Estates in South Dade County. Mary Belle never lost her artistic flair and made caps for every outfit to coordinate with whatever she was wearing. Through the years they lived in Fort Lauderdale, Hollywood, Juno Beach, Jupiter, and Hobe Sound. After Jack retired, they travelled the world and enjoyed a summer home in North Carolina. Shortly after Jack died in 1995, she moved to Indian River Estates, a life care center in Vero Beach, where she lived independently for 17 years and then received exceptional care at Willowbrooke Court (Indian River Estates skilled nursing facility) for 8 years. She is survived by her son, whom she adored, Ben Coulter and his wife Mary Llew, of Palm Beach Gardens. A thank you reception for the caring nursing center staff at Willowbrooke Court, in Vero Beach, was held on January 20, 2020. She was interred at Riverside Memorial Park, in Tequesta, Florida. Mary Belle accepted Jesus as her Savior at a young age. The family requests any contributions in her memory go to The Gideons International, Palm Beach North Camp, P.O. Box 8373, Jupiter, FL 33468-8373.

The family of Mary Belle Coulter created this Life Tributes page to make it easy to share your memories.