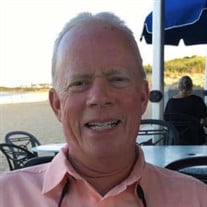 Martin J. Stack - 59, passed away on June 5, 2020 in Jupiter FL after a brief illness. He was predeceased by his mother, Mary Ann (Boyle) Stack; his father, Richard J. Stack, father-in-law Elmer Dino, his sister-in-law, Danette (Dino) Murphy. Marty is survived by his wife of 28 years, Stacey (Dino) Stack; his stepmother, Donna E. Stack, Conklin NY. His brothers Ed (Donna) Stack, Pittsburgh PA; Richard (Cheryl) Stack, Jupiter FL; his sisters, Kim (Tim) Myers, Vestal NY; Nancy (Rick) Heichemer, Jupiter FL. His mother-in-law, Barbara Dino, Debbie (Chris) Dino Vestal NY; Denise (Joe) Battaglini, Vestal NY; John (Ruth) Dino Endwell NY; Eric (Melissa) Dino Norwalk CT; Leslie ( Mike) Tzivanis Chicopee MA. Marty is also survived by the love of his of 32 nieces and nephews, along with 6 great nieces and one that’s on the way. He was known to them as “Unkie Skunkie”, Unkie or Uncle Marty. He is also survived by his best friends Mike McCarthy and Tom Delmarter, plus the many close, dear friends from Binghamton NY, and Jupiter FL. His loyal companion, his golden retriever Clover. Marty graduated from Binghamton North High School and attended Palm Beach Junior College in Boca Raton before returning back to Binghamton to work in the family business of Dick’s Sporting Goods. Marty worked for Dick’s for over 25 years before leaving the company to pursue his own businesses; Northeastern Water Conditioning (Culligan) in Taylor, PA and Atlantic Coast Water Conditioning (Kinetico) in Stuart, FL. Marty was a member of Vestal Hills CC, Genegantslet Golf Club, Binghamton CC and Jonathan’s Landing Golf Club since 2003. His love for the NY Yankees brought him to test his ability at several Yankee Fantasy camps in Florida and Arizona. He played with legends – Don Larson, Frank Howard, Mickey Rivers, Ron Guidry and becoming great friends and fishing buddies with Joe Girardi and his daughter Lena. His other love of sports teams included the Fighting Irish of Notre Dame, Syracuse Orange, the Boston Celtics, the NY Giants and the Masters Golf tournament. His absolute love of the water created a fisherman like no other – he enjoyed fishing, taking many young ones on “Pinstripes 2” and would often be given the title of “Captain Marty”. Marty will be remembered as a kind, gentle soul, who would do anything for anyone. He was surrounded by his family, played like a champion and left us peacefully too soon – special thanks and love go out to Nancy, Rick, Siobhan, Cal, Corinne, TJ and Matthew for taking such good care of him and being our team leaders on “Team Marty”. In lieu of flowers, expressions of sympathy can be made to “StacheStrong” supporting brain cancer research, www.stachestrong.org or JL CARES 16823 Captain Kirle Drive, Jupiter FL 33477. “If I leave here tomorrow would you still remember me? For I must be traveling on now ‘cause there’s too many places I’ve got to see” “Won’t you fly high, free bird!” Celebrations of Marty’s life will take place in Jupiter, FL and Binghamton, NY at a later date when the world opens up again and we can give proper hugs.

The family of Martin John Stack created this Life Tributes page to make it easy to share your memories.