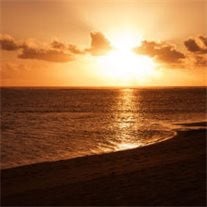 Martha McAdoo, of Juno Beach, passed away Tuesday, August 12, 2014. Martha was born in Lebanon, TN on June 9, 1922; she was a true Southern Belle. She graduated with a BA in History from University of Tennessee. During WWII, her best friend, Liz suggested that Martha write to a soldier who was related to Liz's beau. They corresponded during the war and while he was a POW in Germany. When James Coles Goodner came home from war, they were married on September 14, 1944. They moved to Rivera Beach, Florida to start their life together. They raised their children John "Mac" and Madelyn in Lake Park, FL. Eventually Martha and Coles moved to Jupiter, FL opening Goodner's Variety Stores. They were Charter members and very active in the Jupiter-Tequesta United United Methodist Church. Martha and her daughter, Madelyn, opened Goodner's Hallmark Stores. Martha was a lifelong Christian who loved to learn about everything around her. She loved growing orchids and violets. She took lifelong learning classes at FAU. She enjoyed travel throughout the world- going to Europe, Russia, China, Australia, South America, Central America and the United States. She was very passionate about the Arts- loved to see plays, the ballet, and concerts. Her last outing, in March, was to a jazz concert at FAU. Martha was the beloved and loving wife of Coles; wonderful mother of Madelyn and John "Mac" (Judy); proud grandmother of Sonya, Brian, Jason, Amy and Shannon; the proud great-grandmother of Jerod, Logan, Orianna, Jacob, Savannah and Zoe; and a lifelong friend of many. A graveside service for family will be held at 10 am at Riverside Memorial Park in Tequesta on Friday, August 15th. A memorial service for all will be held at 1 pm at the Waterford Auditorium in Juno Beach, FL on Friday, August 15th. In lieu of flowers, please make donations in her name to Trust Bridge Health (a merger of Hospice of Palm Beach County and Hospice by the Sea); 5300 East Avenue, West Palm Beach, FL 33407; (561) 848-5200; www.TrustBridge.com.

Martha McAdoo, of Juno Beach, passed away Tuesday, August 12, 2014. Martha was born in Lebanon, TN on June 9, 1922; she was a true Southern Belle. She graduated with a BA in History from University of Tennessee. During WWII, her best friend,... View Obituary & Service Information

The family of Martha M. Goodner created this Life Tributes page to make it easy to share your memories.