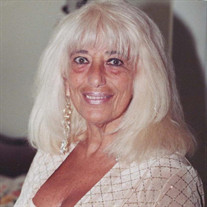 Marlene Anne (Giordano) Braswell, 79, passed away at her Tequesta, FL home on August 4, 2020 with her husband and daughter by her side. Born in Providence, Rhode Island she was the daughter of the late John "Bucky" & Helen (Greco) Giordano. She resided in both Cranston, RI and Narragansett, RI until she moved to South Florida in 1985. Marlene made a difference in so many ways. She was an active and longtime member of St. Mark's parish in Cranston RI, volunteered at various hospitals around Rhode Island, volunteered at Cranston-Johnston Catholic Regional (CJCR) School, and founded the Italian-American Club at Point East Condominium Association in Aventura, FL. On a more personal level, she helped two uncles in their times of need, and when her beloved mother became ill, she cared for her at home until passing. After her granddaughters were born, she insisted on taking care of them until they were school aged. She taught them academic foundations in an environment filled with fun, love, and faith. Above all else, Marlene valued family and faith. S he attended Catholic mass daily and prayed as often as time permitted. She was intensely devoted to her family and friends, and was the most extraordinarily loving and supportive person they could have ever wished for. She had a zest for life. She felt a life without passion just wasn't worth living. Marlene's smile lit up a room and people were instantly drawn to her magnetic personality. She never met a stranger - they were just friends she hadn't met yet. She had an incredible gift of making everyone in her life feel special. Her greatest love was s pending time with her daughter & granddaughters, followed by New York Yankees baseball games. She leaves behind her devoted husband Donald Braswell, cherished daughter Sabra (Richard) Avery, beloved granddaughters Hannah and Haley, her cousin Joan (Raymond) Boscia, who was closer to her than a sister, and godson Raymond D. Boscia II. She was an angel on earth who will be guiding us from heaven for the rest of our lives. She will be deeply missed but forever in our hearts! In lieu of flowers, donations can be made in Marlene’s memory to Treasure Coast Hospice, Stuart, FL https://www.treasurehealth.org/.

Marlene Anne (Giordano) Braswell, 79, passed away at her Tequesta, FL home on August 4, 2020 with her husband and daughter by her side. Born in Providence, Rhode Island she was the daughter of the late John "Bucky" & Helen (Greco) Giordano.... View Obituary & Service Information

The family of Marlene Anne Braswell created this Life Tributes page to make it easy to share your memories.

Marlene Anne (Giordano) Braswell, 79, passed away at her Tequesta,...