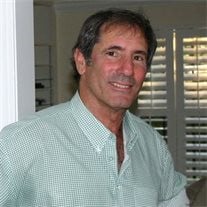 Mark Philip Poncy Mark Philip Poncy went back to God on February 1, 2012 in Jupiter, Florida, surrounded by his wife of 43 years, Marnie, and their four children—Morgan (Susan Brown), Chip (Jane Plomley), Mara (Jay Hatfield), and Mike (Amanda Taylor). Born in New York City on February 13, 1947 to George and Mary Poncy, Mark grew up a rabid Yankees, Giants and Rangers fan with his two brothers, George Jr. (Susan Thomas) and Richard (Carole Stott), and indoctrinated his family and many others with his sports patronage. He was educated at The Delbarton School, Georgetown University, Fairleigh-Dickinson University, and George Washington University. At 20, Mark fell in love with Marnie Ritchie and began a wonderful family that adored him and reveled in being the focus of his life. They moved to Palm Beach County in 1974, where Mark, his brothers and his Dad formed and grew Steridyne Corporation, a family business in medical product development, for 23 years. Mark and Marnie enjoyed raising their family in the area's small town environment, where Mark coached, played, prospered, and became a central figure in the community. A favorite little league coach, Mark taught countless kids how to compete and enjoy the game of life with character, pride, humility, and a great sense of humor. Off the field, Mark became a father figure to many, mentoring kids in various endeavors in classrooms, the backyard, and around the kitchen table. Mark's creative spirits and talents were enjoyed by many. He was an amazing storyteller, musician, composer, and inventor. He wrote novels, published numerous articles and recorded a diverse array of musical pieces, including singer-songwriter compositions, classical works, musicals, an alma mater and a Mass. Mark's ingenuity was also reflected in his patents, inventions, and business ventures. An intellectual property expert, Mark's recent work with his life-long friend, Jack Scarola, inspired him to enroll in law school—he remained a student of life until death. Mark is survived and loved by his mother, his two brothers and their families. His sandbox crowd of lifelong friends will continue to treasure his friendship as they play the many games Mark shared with them. Mark and Marnie's love story continues in their now eight children and twelve vibrant grandchildren. Marnie, Chip, Mara, and Mikey want to thank Morgan, as both a physician and a son, for his incredible care of his father during this past difficult yet joyous year. The entire family is grateful for the professional and loving care provided by his physicians, nurses, and their staff. Mark was a thinker—a living manifestation of Rodin's masterpiece. The scientist tells us that where there is loss, there is also gain, while the poet claims gain cannot be met without loss. Mark insisted that both are correct, and his life was a beautiful testimony that he, as always, got it right. Mark's funeral Mass will be celebrated at St. Paul of the Cross on Singer Island at eleven o'clock on Monday, February 6, 2012. For directions & online condolences, please visit www.taylorandmodeen.com. Taylor & Modeen Funeral Home Family Owned & Operated (5610 744-2030) Jupiter, Fl

The family of Mark Philip Poncy created this Life Tributes page to make it easy to share your memories.

Mark Philip Poncy went back to God on February...