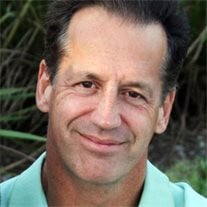 Mark Giuliani, husband of his beloved wife, Kim; loving father of Olivia, Amelia, Trevor, and Tyler; son of Rosemarie and Joseph; and brother of Jody and David Giuliani, passed away April 30, 2013. Originally from Stamford, CT, Mark earned his undergraduate degree at Western Connecticut State University, and then received a commission as a Lieutenant in the U.S. Army in 1986. He graduated Officer Candidate School and Paratrooper School, and then served as a communications officer with the 24th Infantry (Mechanized) Division as Platoon Commander, then Executive Officer of a 200 soldier Company as Staff Communications Officer, Artillery Battalion. Upon leaving active duty as a First Lieutenant, Mark earned his law degree from Quinnipiac University School of Law. A merit scholar and associate editor of the Law Review, he graduated law school with honors in 1992. Upon graduation from law school, Mark received a commission as a Captain in the U.S. Air Force, and served with distinction as an officer and attorney in the Judge Advocate General's Department. Assigned to the 347th Fighter Wing, he was lead prosecutor for numerous criminal trials and defended the U.S. Government in civil actions brought under the Federal Torts Claim Act, often in conjunction with the U.S. Attorney's Office. He consulted for and advised the Air Force base commander on a variety of other civil matters and represented the Air Force in employment discrimination cases before the Equal Employment Opportunity Commission. Upon leaving Air Force active duty in 1996, Mark practiced with civil litigation defense firms in Connecticut and handled a wide range of cases including products liability, premises liability, medical malpractice, auto and construction defect matters. He tried a number of cases to verdict with noteworthy success. He later joined an international aviation law firm in 2003, and relocated to Florida in 2005. Mark litigated complex cases on a national and international basis involving major air disasters and general aviation accidents, and appeared before various Courts in Florida and other parts of the country. Most of these cases involved complex claims for catastrophic injury and death, product defect, pilot and aircraft operator error, faulty maintenance, and improper aircraft inspection and repair. Mark joined the Firm of Krupnick Campbell, et al in 2009. His practice focused on representing individuals in complex cases involving defective products, auto accidents, aviation accidents, construction mishaps, and premises liability. He was admitted to practice in the States of Florida and Connecticut as well as before the U.S. Court of Appeals for the Second District, and various U.S. District Courts. He was a member of the American Bar Association, National Transportation Safety Board Bar Association. Florida Bar Association, Florida Justice Association, and Broward Justice Association. Mark was an accomplished arranger and conductor and was co-founder of Theatre Orchestra of Florida. Mark conducted the London Symphony Orchestra at Air Studios in London in 2012 with his close friend and renowned tenor, Roberto Iarussi, which project is soon to be released. Moved by the tragedy in Sandy Hook, Mark composed and performed his tribute "Images of You" which received nationwide attention and acclaim. Mark's compassion for others was boundless. Mark will be fondly remembered by his family, friends, and colleagues as a "Renaissance Man" - a true intellectual - enormously talented in the arts, sciences, and in his profession. His artistic achievements ranged from painting to classical music. He was respected as a consummate gentleman and trial attorney, respectful and courteous to all. Most importantly, he will be remembered as a wonderful husband, son, and father. He was forever devoted to his family, the center of his life. There will be a wake held on Friday, May 3, 2013 from 4 - 8 p.m. at Taylor & Modeen Funeral Home, 250 Center Street, Jupiter, Florida 33458. A funeral mass will be held at St. Peter's Catholic Church, 1701 Indian Creek Parkway, Jupiter, Florida 33458 at 10:00 a.m. on Saturday, with interment to follow at 11:30 a.m. at Riverside Memorial Park (Dignity Memorial), 19351 SE County Line Road, Tequesta, Florida 33469. In lieu of flowers, the family requests that donations be made to the Olivia and Amelia Giuliani Scholarship Fund. Please contact Joseph J. Slama at [email protected] or (954) 763-8181.

The family of Mark Ross Giuliani created this Life Tributes page to make it easy to share your memories.